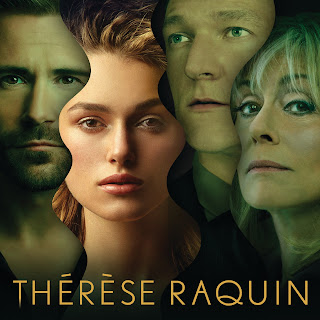 Thérèse Raquin is about as unrelentingly gothic as anything you are likely to see on stage. It the sort of melodramatic tale that occasionally crops up on PBS’s Masterpiece Theater or in some dark and dank bodice ripper of a movie – the kind of thing that Saturday Night Live might have turned into a skit introduced by Dan Aykroyd as Leonard Pinth-Garnell, host of “Bad Conceptual Theater.”

Our heroine (Keira Knightley, making her Broadway stage debut) has been reared to be quietly tractable by a mildly annoying aunt (Judith Light, a treasure, even in this thankless role). The aunt, Madame Raquin, has decided how perfectly lovely it would be for Thérèse to marry her son, Thérèse’s doltish cousin Camille (Gabriel Ebert), so that the three of them can continue to live together.  Forever!  Thérèse, who has spent her entire life without the least expectation of experiencing any sort of pleasure, acquiesces out of sheer intertia.

Through most of Act I, Ms. Knightley's character is the embodiment of clinical depression, her demeanor rotating among various facial expressions that include gawking, gaping, goggling, gazing, ogling, staring, peering, and glaring. She has almost nothing to say as day after dreary day passes by, even after Camille decides to drag everyone off to Paris to live. (Who knew that the City of Lights could be so very gloomy).

Yet despite Beowulf Boritt’s elaborately bleak set design, Paris still manages to work its magic on Thérèse, whose heart and loins suddenly spring to life when she meets Laurent (Matt Ryan), an old friend of Camille. Before you can say “Anna Karenina,” the pair is engaged in a hot and heavy affair, leading inevitably to a plan to murder Camille – and from there to the sort of consequences you would expect to occur in such a tale as this.

Director Evan Cabnet and the cast – which also includes David Patrick Kelly, Jeff Still, and Mary Wiseman as friends of the family who show up for weekly games of dominoes and who appear to be oblivious to the goings-on – milk the play for every drop of gothic atmosphere they can muster, and it certainly is unlike almost anything else I can recall seeing through my many years of theatergoing.

British playwright Helen Edmundson's adaptation of Thérèse Raquin (at the Roundabout Theater Company’s Studio 54) is a brave plunge into theatrical performing for the sprightly Ms. Knightley (Pride & Prejudice; The Pirates of the Caribbean), but oh what a head scratcher it has all turned out to be.

Posted by Howard Miller at 9:59 PM