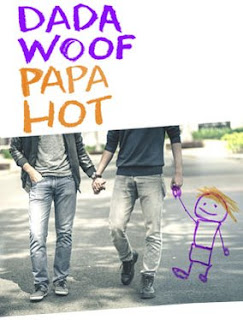 Back in 2005, playwright Peter Parnell and psychiatrist Justin Richardson co-authored a children’s book, And Tango Makes Three, the true story of a pair of male chinstrap penguins at New York’s Central Park Zoo who bonded with one another and attempted to nest and hatch a rock together. Kindly zookeepers replaced the rock with a real egg, and before long, out popped Tango.

We’ve come a long way from oh-so-controversial gay penguins in the ensuing decade, and Parnell, who in the interim married Mr. Richardson, is back with Dada Woof Papa Hot, a new play at Lincoln Center’s Mitzi Newhouse Theater in which he explores a similar situation, but this time with gay male humans as his protagonists.

Was it only last year that playwright Terrence McNally’s Mothers and Sons opened on Broadway and gave us an evening of confrontational arguing over the right of gay men to live with dignity, to be able to marry, and to raise families? That seems such old news now, as abstract “rights” have segued into reality, and more and more gay couples are discovering they are pioneers in the world of child rearing, where there are few role models that match their situation.

That’s the far more complicated story that Dada Woof Papa Hot tells. And even if the title suggests a gay comic romp, the play is decidedly a serious – though often funny and only occasionally pedantic – eye-opener for those who casually assume that gay married couples are in the same situation as heterosexual couples.

I’m not talking about “acceptance,” here; that is not the issue this play examines as it asks us to consider the lives of Rob (Patrick Breen) and Alan (John Benjamin Hickey), the middle-aged couple at its center. They and their friends and acquaintances are all trying to figure out their changing identities and relationships that co-exist side by side with the joys and vicissitudes of parenthood.

Couples like Rob and Alan, who had been together for many years before being granted the right to marry, are entering into a brave new world.  Stonewall, the AIDS crisis, and other milestones in the fight for equality – along with whatever shaped their individual self-awareness and coming out experiences – all hover over their decision to become parents. Most of the parents they know, and certainly the ones in the generation they grew up with, had certain societal models about how to do all of this. Child rearing for gay couples – at least in the here and now – has its own unique flavor, and includes by necessity all of the legal and financial issues involved in adoption, surrogates, egg donors, frozen embryos, sperm banks, and other complications.

The playwright has taken away the financial burden by making sure the couple is comfortably well off, but Rob and Alan are struggling, nevertheless. Mr. Hickey gives a lovely layered portrayal of Alan as a man who is feeling lost and uncertain of his place in the new family arrangement, where Rob and their young daughter Nicola have the sort of strong bond that eludes him and that leaves him feeling the odd man out.

That Rob is Nicola’s biological father adds to Alan’s consternation as to his place in the picture, and he seeks solace in the younger Jason (Alex Hurt), half of another couple of their acquaintance. A third couple, Michael (John Pankow) and Serena (Kelley Overbey), is also going through some rocky times; Michael , who is Alan’s closest friend, is carrying on an affair with an actress, Julia (a freewheeling and brassy Tammy Blanchard).

It’s a lot for one play to juggle, but Mr. Parnell has done a very good job of defining each of the characters and the flailing relationships, and Scott Ellis directs it all with a steady hand.

At some point down the road, gay parenthood may very well turn out to be as commonplace and as complicated as the more familiar male/female models, but for now, Dada Woof Papa Hot gives audiences a glimpse into the unfolding mystery of love, fidelity, and parenthood as seen through the experiences of gay men who want and don’t want to be ordinary.

Posted by Howard Miller at 7:24 PM