As Jean Paul Sartre famously said, “Hell is other people.” This is most certainly true for the people who are gathered together by necessity in the Mint Theater Company’s splendid production of Irish playwright Hazel Ellis’s 1938 drama Women Without Men, now on view at the company’s new home at City Center Stage II.

To begin with, what a nice new home the Mint has found for itself after being pushed out of the midtown space it had occupied for two decades, a victim of skyrocketing rental costs. It is sad to be forced out, or course, but the new space at City Center is a lovely one, with lots of room for the wonderful set Vicki R. Davis has designed for this production, the first thing you see when you take your seat in the audience.

It is the teachers’ sitting room at a private girls’ school -- all polished wood, walls lined with bookcases, a lovely rug on the floor, and comfy chairs in front of the fire.  How cozy and inviting it all looks. Until, one by one, we meet the embittered, backbiting, thin-skinned, and territorial teachers who have spent far too much time with one another over the years.

They are, in short, trapped. They are “women without men,” as the title says, meaning they have little recourse but to work in one of the few professions where it is acceptable for them to be employed. The school is not a large one, with only fifty students, a headmistress (Joyce Cohen), a matron (Amelia White) and six teachers, including the eager newcomer, Jean (Emily Walton). Except for holidays, all of them live together and work together day in and day out, year after year after year.

We get to meet everyone as Jean does, and we see their strengths and their foibles through her eyes.  Jean is the lucky one, engaged to be married but postponing her wedding day so she can put her education to good use before settling down.  She is in it to make a difference in the world, while everyone else needs to teach in order to eke out a living.

And what a crew they are: the pompous and judgmental Miss Connor (Kellie Overbey), the fluttery and vain Miss Ridgeway (Kate Middleton), the hypersensitive and insecure Miss Willoughby (Aedin Moloney), the easily offended outsider Mlle. Vernier (Dee Pelletier), and the above-it-all Miss Strong (Macy Bacon), the closest to a friend that Jean can find.

A tiff between Jean and Miss Connor, who has taken an instant dislike to the younger woman, becomes the impetus for the central plot, resulting in a couple of surprising turns. There are also a few interactions with some of the students. But really, the play is mostly about the circumstances that have forced these women together, and their reaction to their stifled existence. Indeed, the only comfort each can find is through feeling superior to the others.

The cast, under Jenn Thompson’s direction, is rock solid, and each of the actresses manages to create a distinct personality for her character. You probably would not want to spend much time with these women in real life, but this portrait of their confined and constrained lives is thoroughly engaging. A special thumbs up, too, to dialect coach Amy Stoller.

Women Without Men is yet another triumph for the Mint, a company that has made it its mission to unearth and breathe new life into little known works from the past. It is a mission they take on with with the greatest care and with consistently excellent results.

CABIN IN THE SKY: Rarely Produced Vernon Duke Musical Gets the Golden Touch at Encores! 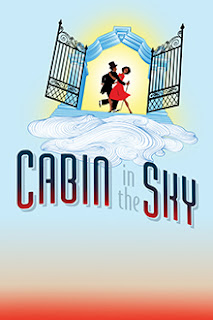 Even talented Tony winners LaChanze and Chuck Cooper and Tony nominee Norm Lewis take a back seat to the stunning choreography and choral work in the Encores! production of the 1940 Vernon Duke/John Latouche musical Cabin In The Sky at New York City Center.

Who, for instance, could have predicted that a performance of the traditional spiritual “Dry Bones” (you know it: Toe bone connected to the foot bone/foot bone connected to the heel bone) would be the showstopper over the enduring standard “Taking A Chance On Love?” But it most certainly is, thanks to Linda Twine’s glorious vocal arrangement, Camille A. Brown’s choreography, and a cast that pulls it all together with such precision, you’d think they’d had a year to rehearse instead of the 10 days that is typical of an Encores! presentation.

Cabin In The Sky, with its all-African American cast, was never a big hit.  It had a decent run of 156 performances on Broadway in 1940/41, with direction and choreography by George Balanchine and featuring Ethel Waters as its star.  Two years later, it was made into a film with Ms. Waters reprising her central role. (The movie co-starred Eddie ‘Rochester’ Anderson and Lena Horne).

The show is a parable about Good versus Evil, a struggle between God and Satan for the soul of Little Joe, a weak-willed man for whom the temptations of gambling, drink, and womanizing are too alluring for him to ignore. When Joe is killed in a fight, and just as Satan’s minions are about to haul his soul to hell, the heart-rending prayers of his loving and godly wife Petunia lead to a heavenly reprieve. In order to win his way through the Pearly Gates, Joe must redeem himself within six months, though he will have no knowledge of the intervention or the conditions. Throughout the show, Satan’s team and the Lord’s team coach from the sidelines.

The Encores! production stars LaChanze (Tony winner for her role as Celie in the original Broadway production of The Color Purple) as Petunia; Michael Potts (The Book of Mormon on Broadway) as Little Joe; and Carly Hughes (replacement Leading Player in the hit revival of Pippin) as the sultry temptress Georgia Brown, Lena Horne’s role in the movie.  Chuck Cooper is Satan’s son, charged with capturing Little Joe’s soul, and Norm Lewis is The Lord’s General.  Cooper and Lewis are surrounded by their respective supporters; the Devil’s gang are all in red, and the Lord’s cheerleaders are in blue. Karen Perry’s costumes and Ken Billington’s lighting design help to keep each side well defined, even as they move about the stage.

The lightweight banter (“the asbestos chariot is waiting,” Cooper’s character razzes the dying Little Joe), Ruben Santiago-Hudson’s snappy directing, and the dancing and singing by a very talented company elevate what could very well have been a clunky production of a show that eschews subtlety in its simple plot. The score, orchestrated for the production by the great Jonathan Tunick from an extant piano version, contains a mix of numbers – some forgettable, some that feel oddly shoe-horned into the show, and some that are real gems. One of the latter is the well-known “Taking A Chance On Love,” which LaChanze belts out at full throttle (though her voice was a little raggy at the performance I attended).  She also does a fine job with “Happiness Is A Thing Called Joe,” and she sizzles with a song called “Savannah” in a scene in which Petunia – disgusted with what she believes to be Joe’s backsliding – gets back at him by vamping it up at a nightclub. Carly Hughes matches LaChanza sizzle for sizzle with her performance of “Honey in the Honeycomb.”

The excellent on-stage orchestra, a hallmark of every Encores! production, performs masterfully under the highly competent hand of music director Rob Berman, who also contributed to the vocal arrangements. But truly, it is the dancing and the singing by the ensemble that bring the gleam to this old musical, and it is there where the creative team has done its strongest work. Camille A. Brown, the choreographer, brings out a graceful strength in the dancers, reminiscent of her work with Alvin Ailey American Dance Theater. And while “Dry Bones” is the stunner of the evening, the chorus does a majestic job of performing another spiritual, “Wade In The Water,” and provides first-rate harmonies on Vernon Duke's swing-inspired songs.

Other than renting the movie, it is unlikely you will see another staged production of Cabin In The Sky any time in near future, so catch it while you can. The run ends Sunday night.

Posted by Howard Miller at 10:52 PM No comments: