The choreography and the elements of Chinese Opera are the real winners in King Fu, David Henry Hwang’s entertaining if shallow new play based on the life of martial arts actor Bruce Lee, now on view at the Pershing Square Signature Center.

Kung Fu, having its delayed premiere after last season’s disappointing program of Hwang’s works (a dismal Golden Child and somewhat stronger The Dance and the Railroad, which was as much an intriguing performance piece as a play) is like the CliffsNotes version of what could have been a biting satire about the difficulties of an Asian American actor trying to break through the barriers of racism in the United States in the years following World War II.

It seems as though Mr. Hwang, who has skirted similar issues before, just does not want to go there. So what we get is an entertaining piece of fluff that only occasionally raises social issues, as Bruce Lee is unable to grab hold of the brass ring of longed-for stardom in Hollywood, and ultimately finds his success in martial arts movies only when he returns to Hong Kong.

Throughout the play, Mr. Lee (Cole Horibe, best known as a finalist in one of the many seasons of television’s So You Think You Can Dance) is surrounded by loving martial arts students, loving friends, a loving wife (Phoebe Strole) and a loving son (Bradley Fong, a real charmer).

The only sign of discord arises in Lee’s recollections of his cold and distant father, an actor famous for playing clown roles in the Chinese Opera.  As embodied by Francis Jue, the father is the most fully realized character in the play—a frustrated, distant, angry, opium-smoking man from whom his son was long estranged.  But even here, Mr. Hwang cannot resist smoothing things over by offering up an imagined scene in which Bruce Lee and his father’s ghost battle it out, with Mr. Lee emerging whole and triumphant.

Storywise, Kung Fu is a gentle bio-play, a Hallmark Card sort of production about nice people being nice. Only Sonya Tayeh’s choreographed moves, well performed by the entire cast, lift the production above the ordinary.

The one bit that comes closest to spoof is the stylized portrayal of Mr. Lee’s role as Kato, the sidekick to The Green Hornet in the short-lived television series from the mid-1960s that attempted unsuccessfully to match the success of the comic book-like Batman phenomenon. Much is made of the fact that Lee had to wear a mask as Kato in order to underplay his Asian-ness, and here, at least, Mr. Hwang makes his point—although, at the same time, one wonders why Bruce Lee's having a white wife is never raised as an issue—neither in the U. S. nor in Hong Kong.

Under Leigh Silverman's direction, the game cast members, many of whom have had little acting experience, are all quite good at performing in front of an audience.  Certainly, they’ve got the kung fu moves down, and they display a friendly upbeat energy, often leaping across multiple roles (Jon Rua, Peter Kim, and Emmanuel Brown—who also serves as the fight captain—are especially personable).

In the end, however, even though King Fu does make for a pleasant evening, it simply has too little to say about its subject or about the Asian American experience.

Posted by Howard Miller at 2:41 PM No comments:

‘Little Me’: A Fun-Time Romp from Encores! 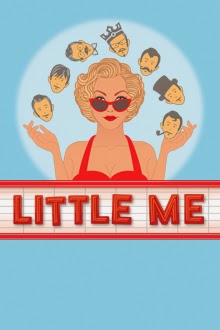 Little Me, the 1962 Neil Simon/Cy Coleman/Carolyn Leigh musical, is probably not a rare undervalued masterpiece that needs to be lovingly restored to appreciate its true worth. But the current joyful production by Encores! is as welcome as a cup of hot chocolate laced with whipped cream during these snowy, icy, sleety, bitterly cold days and dreary nights that have been the hallmark of this winter in New York.

Little Me is a laugh-filled show with TV sketch comedy roots (Simon famously launched his career writing skits for Sid Caesar, who starred in the original Broadway production) and a tuneful score, with music by Coleman and lyrics by Leigh.

The story unfolds through the frame of depicting the writing of the memoirs of the fictional stage, screen, and television star Belle Poitrine, as told to “Patrick Dennis,” the pen name of the author of the book on which the musical is based (as well as the author of the more highly successful Auntie Mame).

But even though Belle’s life story provides the shape for the show, the musical rises or falls on the strength of the male lead, who portrays 7 different men in Belle’s life, most of whom die before the end.

With the Encores! production, we are most fortunate in that the shoulders on whom this task falls belong to Christian Borle, who has a keen and mischievous sense of comic timing reminiscent of Groucho Marx or Charlie Chaplin (this was even truer of Borle’s performance as Black Stache in Peter and the Starcatcher).

Borle runs on and off the stage, going through quick costume and personality changes throughout the entire show. (This includes the requisite gag where he has to “ad lib” a cover-up for an incomplete change in appearance). The best of these characterizations is that of Fred Poitrine, the terribly nearsighted and socially inept World War I doughboy, who endearingly sings “Real Live Girl” to Belle, and marries her just in time to legitimize the ensuing birth of her daughter before he marches off to his untimely death by paper cut.

As good as Borle is, this is far from a one-person show, which boasts wonderful performances from the entire cast, including Rachel York as the young Belle; the marvelous Judy Kaye as the older Belle; Tony Yazbeck as George, the boy-next-door turned hotshot nightclub owner (he delivers a terrific “I’ve Got Your Number”); Harriet Harris as the snobbish mother of Noble, Belle’s one true love; and Lee Wilkof and Lewis J. Stadlen as Belle’s agents, the Buchsbaum brothers. Stadlen, who most recently appeared with Nathan Lane in The Nance, is another theatrical stalwart who took the world by storm when he gloriously pulled off the multiple-roles acting feat by playing five characters in the acclaimed 1974 revival of Candide.

This production also boasts outstanding work by the singers and dancers of the chorus.  And might I add, the choreography by Joshua Bergasse is so creative it is a wonder to me he has not become a major Broadway fixture.

With Little Me, Encores! is entering its 21st year of producing short-term revivals of Broadway musicals, and it almost seems to top itself year after year.  Minimalist set designs have become increasingly clever (the sinking of The Gigantic in Little Me could give Titanic: The Musical a run for its money at the concert production at Avery Fisher Hall later this month), and the eschewing of script-in-hand performances by the cast is becoming more and more de rigueur.

A shout-out to director John Rando and music director Rob Berman, as well as to everyone involved with this production.  They should all join Belle in raising a glass and singing:  Here’s to us, my darling my dear/Here’s to us tonight!

Posted by Howard Miller at 4:41 PM No comments: