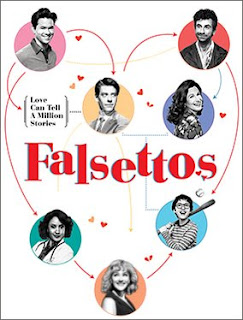 I would argue that Mr. Finn is minted from the same gold ore as these two.

Just imagine, for example, what Sondheim might write if instead of tailoring his songs to characters created by others, he were to openly express his own deepest feelings – both emotionally raw and psychologically complex – through his music and lyrics. That’s what it is like experiencing Finn’s work, with melodies and words that are smart and moving, quirky and personal and honest. Only he knows if what he writes about expresses the literal truth, but it is certainly some of the most truthful work you’ll ever hear on the Broadway stage.

In loving testament to Finn’s talent is the current revival of Falsettos, a Tony winner from 1992 with a book by James Lapine, who has long been associated with both Finn and Sondheim. Mr. Lapine is on hand once again to direct this production, now at the Walter Kerr Theatre.

Falsettos presents the tale of a group of very neurotic and complicated people, starting with Marvin, a competitive, self-centered man who wants it all, including the good will of his wife and son after he leaves them for another man. His self-deprecating ex-wife Trina is unsure of what she wants or even if she can allow herself to want it. Their pre-adolescent son Jason is moody and worried about his future (will he be gay like his dad?). Marvin’s on-again off-again man-child boyfriend Whizzer has commitment issues. Marvin’s psychiatrist Mendel who, after Marvin departs, becomes Trina and Jason’s psychiatrist, and, later, Trina’s second husband. Oh, and there’s the lesbian couple from next door, a caterer and a physician.

The story unfolds through its songs, with staging that makes use of modular geometric forms (by set designer David Rockwell) that the cast pushes and pulls into various positions for the individual scenes that make up the show.

In its design, Falsettos may remind you of Sondheim’s 1971 musical Company with its “scenes from a life” approach. At its best, it may also remind you of Tony Kushner’s Angels in America, dealing as it does with a gay relationship at the dawn of the AIDS crisis. Act I takes place in 1979, while Act II is a mere two years later. Yet in that brief ensuing time, a dark shadow has begun to fall over everything; as Dr. Charlotte, the physician, sings with heart-wrenching frustration: “bachelors arrive sick and frightened/They leave weeks later unenlightened/We see a trend, but the trend has no name.”

The central character of Marvin is played by Christian Borle, who won a Tony last year for his strutting portrait of Shakespeare in Something Rotten and who will be taking on the role of Willy Wonka in Charlie and the Chocolate Factory come spring.

This is a much different role for the actor generally associated with offbeat comic performances, yet Borle shows he has the chops to carry it off, just as he did when he took on and nailed the role of the AIDS patient Prior Walter in the Signature Theater Company’s production of Angels In America in 2010. The rest of the cast is equally strong: Andrew Rannells as Whizzer, Brandon Uranowitz as Mendel, Anthony Rosenthal (terrific as Jason), Tracie Thomas as Dr. Charlotte, and Betsy Wolfe as Cordelia, who winds up catering Jason’s unusual bar mitzvah, which takes place in a hospital room.

But if anyone steals the show, it is Stephanie J. Block as Trina, who is “tired of all the happy men who rule the world” and wants a piece of that elusive happiness for herself.  Here’s Trina in the midst of a meltdown singing of her erstwhile marriage to Marvin, in a song titled "I'm Breaking Down."

Oh, sure, I'm sure he's sure, he did his best.
I mean, he meant to be what he was not.
The things he was are things which I've forgot.
He's a queen.
I'm a queen.
Where is our crown?

Ms. Block makes this a showstopper that will almost assuredly guarantee her a Tony nomination.

Despite all of the dysfunction, Falsettos is full of surprises, many of them capturing life’s funny-awkward moments. A great set piece, for example, has all of the adult cast members sitting on bleachers at a little league baseball game, there to support Jason as he fumbles at bat.

Only occasionally are there puzzling choices with respect to how a couple of the numbers are staged, as if Mr. Lapine could not think of how to absorb them into the plot. There’s the opening song, “Four Jews in a Room Bitching,” in which the characters parade around in Biblical attire, and “March of the Falsettos,” which comes off as an outlier that does not seem to serve a purpose. It possibly is a dream sequence based on Jason's insecurity, but that is not at all clear.

Falsettos is the finalized version of what started out as two separate one-act shows. March of the Falsettos from 1981 has become Act I, while Falsettoland from 1990 has become Act II. Both are available on CD, and plans are afoot for Ghostlight Records to produce a two-disc set of the current production. (Now would be a good time to interject kudos to Mr. Finn's favorite orchestrator, Michael Starobin, who worked on these, plus Finn's A New Brain and The 25th Annual Putnam County Spelling Bee. Starobin is responsible for making the tiny Falsettos orchestra sound so rich.)

But even before March of the Falsettos was produced, William Finn wrote another show called In Trousers (1979), which essentially serves to provide Marvin’s backstory. It didn’t do well as a theatrical production, but, truly, it contains some of Finn’s best songs. “I’m Breaking Down” is the only number that made the transition to Falsettos, but pretty much every one is a gem.

At the recent 2016 American Theatre Critics Association party at Sardis, I had the opportunity to ask Mr. Finn if there were any plans to revive In Trousers. He did not seem to feel that was likely, but he did throw me a bone by saying that Encores! was interested in presenting a semi-staged version at City Center. Last summer, Encores! did a terrific production of A New Brain, so maybe something further will come out of that successful experience.

Meanwhile, do yourself a favor and pick up a copy of the In Trousers CD. It is a marvel.


Feel free to share this blog with your friends, and to offer up your own theater stories by posting a comment. I also invite you to check out the website Show-Score.Com, where you will find capsule reviews of current plays from Yours Truly and many other New York critics.
Posted by Howard Miller at 12:29 AM No comments:

A few days ago, I had the pleasure of chatting with six-time Tony Award nominee Danny Burstein at the 2016 American Theatre Critics Association bash at Sardis.

Although he is best known for his work in Broadway musicals (The Drowsy Chaperone; South Pacific; Follies; Cabaret; Fiddler on the Roof), I took the opportunity to single out his performance in the glorious 2013 revival of Lanford Wilson's play Talley's Folley and to ask why he doesn't do more straight plays.  (Here's a link to my review - TALLEY'S FOLLY).

He told me he loved working on that show (a Roundabout production at the Laura Pels) with his co-star Sarah Paulson. But, he said, he sustains his career through a mix of musicals, straight plays, television, and movies. Because he is best known for his performances in musicals, those are the offers he generally gets when it comes to theater work.

It certainly can't hurt that, as he pointed out, musicals generally run longer than straight plays. Longer runs mean longer periods of time for receiving a pay check, cuz even Tony nominees gotta pay the bills!

Still, I'm hoping to see him back in a straight play like Talley's Folly or like Clifford Odets' Golden Boy, in which he performed the same year (a production that was helmed by his director from South Pacific, Bartlett Sher.) Burstein nabbed a Tony nomination playing the role of the kind-hearted boxing trainer Tokio. (Here's a link to my review of that show - GOLDEN BOY)

By the way, Burstein is as down-to-earth and friendly as anyone in the business.  While many performers are cautious about even shaking hands, especially while they are in a show (germs, you know!), Danny was giving out bear hugs like they were going out of style.

You can catch him in his Tony-nominated, Outer Critics Circle and Drama Desk-winning performance as Tevye in the stellar Broadway revival of Fiddler On The Roof (directed by none other than Bartlett Sher, who is clearly a Burstein fan). Just so you know, the show is closing December 31, so best get your tickets now!

Oh, and Danny, if you are reading this, tell your wonderful co-star Jessica Hecht that I've had a burning question I've been wanting to ask her for years -- about a Christmas tree. I didn't have a chance to talk to her at Sardis, but she can reach me at middledoc@gmail.com.

Feel free to share this blog with your friends, and to offer up your own theater stories by posting a comment. I also invite you to check out the website Show-Score.Com, where you will find capsule reviews of current plays from Yours Truly and many other New York critics.
Posted by Howard Miller at 10:57 PM No comments: