GUARDS AT THE TAJ: Questions of Obedience and Culpability Haunt This Disturbing New Play 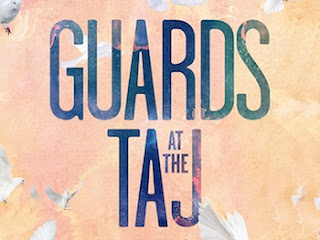 Humayun and Babur, the titular characters in the Atlantic Theater Company production of Rajiv Joseph’s Guards at the Taj, may remind you of Rosencrantz and Guildenstern, the ill-fated minor functionaries from Hamlet, snatched from obscurity to command center stage in Tom Stoppard’s absurdist play, Rosencrantz and Guildenstern Are Dead.  But Mr. Joseph, whose 2011 work Bengal Tiger at the Baghdad Zoo took audiences through an existential and hallucinogenic journey through war-torn Iraq, has a lot more on his mind than clever allusion, especially about the constricted lives of those who exist only to serve the powerful.

The play takes place in 1648, starting in the early hours before the dawn on the day the Taj Mahal – under wraps for the 16 years it has taken to construct it – is to be revealed in all its glory.  It is, by decree of Emperor Shah Jahan, the most beautiful work ever created by humans and will ever be thus.

Before the play opens, Humayun (Omar Metwally) is already standing at attention before a wall at the site, his scimitar held smartly in place over his right shoulder.  After a few minutes, he is joined by Babur (Arian Moayed), a less enthusiastic soldier who has arrived late and who is not terribly interested in the pomp and ceremony of his duties. In violation of protocol, he immediately initiates a conversation with Humayun, who, though reluctant to relax his stance, gets caught up in what quickly becomes the kind of easy banter you’d associate with close and longtime friends.

Unlike Mssrs Rosencrantz and Guildenstern, they are far from interchangeable. Humayun is the good soldier, content to obey orders and to gather up the tidbits of rewards that occasionally fall his way, such as a promised promotion to serve as guard at the emperor's harem. For his part, Babur imagines a better world than the one in which they find themselves trapped. His dreams are of freedom from the regimented life, and of flying machines that will someday take them to the stars.

As the dawn breaks, Babur convinces Humayun to disobey orders and to turn around to gaze upon the magnificent palace that will serve as the tomb of the emperor’s favorite wife.  It is a moment of sheer awe, depicted through David Weiner’s stunning lighting that shines on the pair like a fire from the heavens

If the first scene ends on a note of ethereal beauty, the next plunges us immediately into the hellish depths of an ugliness that, sadly, we humans are as equally adept at creating.
This is the strongest of the four scenes plus a coda that make up the 90-minute intermissionless play, aided in no small way by Timothy R. Mackabee’s remarkable and disturbing set design that has the guards soaked to the skin and wading ankle-deep in a pool of red.

Humayun and Babur have been ordered to carry out a deed of utter cruelty against all 20,000 workers who were involved in the construction of the Taj Mahal, merely to assure the emperor that nothing of such splendor will ever again be constructed.  How the two men handle the burden that has been thrust upon them becomes the core of the play and raises all of the issues that come to mind when considering questions of obedience and culpability, and of honor,  friendship, and loyalty.

The play does suffer from jarring shifts in tone as the play progresses, moving abruptly from Laurel and Hardy-like badinage, to periods of mythic nightmare, to moments of anguish and tenderness, to soaring lyricism. The dance between realism and surrealism is not firmly fixed, and this does keep us from being fully engulfed by the unfolding events.

Still, under Amy Morton’s taut direction, Mr. Metwally and Mr. Moayed do an exceptional job portraying these two pawns in a game over which they have little control, and the overall impact is certainly memorable.

Posted by Howard Miller at 2:26 AM No comments: