The theater awards season is in full swing, and the countdown is on as we approach the BIG DAY, the 68th annual Tony Awards on June 8. It is time for Prof Miller to stick his neck out and make his predictions.  So, let’s polish up the old crystal and see what pops up, starting with the acting awards.

For Featured Actress in a Play, the nominees are:

In this highly competitive category, Prof Miller has narrowed it down to two. Although he didn’t care for the much-lauded production of The Glass Menagerie, Celia Keenan-Bolger was terrific as the preternaturally shy Laura. But she faces stiff competition from Sarah Greene, a standout among a very strong ensemble as the scary/impish Helen in The Cripple of Inishmaan.  In the end, though, Celia Keenan-Bolger gets the Prof’s vote for a richly layered, tender performance that rose above the noise of the co-dependent characters at the center of the Tennessee Williams play.

For Featured Actor in a Play, the nominees are:

The odds favor Mark Rylance, and Prof Miller might have agreed if only the actor had kept himself from edging away from the sublime toward the ridiculous in his performance as Olivia. Instead, we’ll give this one to Paul Chahidi, whose Maria was the highlight of the savvy and audience-friendly production of Twelfth Night.

For Leading Actress in a Play, the nominees are:

And the crystal says:  “Do you really need a crystal ball to tell you that Audra McDonald will win this?  Her performance as Billie Holiday soars beyond anything we’ve seen in a very long time.  Tony #6 is on its way!”  Prof Miller agrees!

For Leading Actor in a Play, the nominees are:

For Featured Actress in a Musical, the nominees are:

Although I was disappointed in Cabaret overall, Linda Emond’s solid performance as Fräulein Schneider ought to carry her through to a Tony win.

For Featured Actor in a Musical, the nominees are:

Another strong competition here, down to two:  Joshua Henry and James Monroe Iglehart. Joshua Henry literally stops the show and fully earns the waves of sustained applause that follow his rendition of “Let It Sing” in Violet, but the edge goes to James Monroe Iglehart, who has his own showstopper with “Friend Like Me” along with the entire juicy role as the Genie in Aladdin.

For Leading Actress in a Musical, the nominees are:

Another tough call, down to two. Sutton Foster has found a perfect fit for herself in the beautifully performed (acting and singing) Violet.  Jessie Mueller shines as Carol King in Beautiful:  The Carol King Musical.  I’d like to call a tie, but I’ll go with the true crowd-pleaser, Jessie Mueller.

For Leading Actor in a Musical, the nominees are:

Gotta go with Neil Patrick Harris here, and hope he will stick with Broadway down the road.

Next, we’ll move on to the non-musical plays.

For Best Play Revival, the nominees are:

Four strong contenders here.  Even though I did not care for The Glass Menagerie, I always appreciate strong work by a director who has a clear vision and is able to carry it out fully.  So thumbs up to John Tiffany… but, I’m calling Twelfth Night, under Tim Carroll’s splendid direction, as the winner.

For Best New Play, the nominees are:

Truth is, none of these hit the bullseye, but Bryan Cranston’s performance as LBJ plus the fascinating story of the powerful and complicated President make All The Way the likely winner.

For Best Director of a Play, the nominees are:

As mentioned above, the more visionary work was done by Tim Carroll and John Tiffany, with Tim Carroll carrying the day for his work on Twelfth Night.

And now, on to the musicals!

For Best Musical Revival, the nominees are:

Loved the performances in Violet, but the book is paper thin, so Prof Miller predicts that Hedwig and the Angry Inch will take the Tony.

For Best New Musical, the nominees are:

After Midnight
Aladdin
Beautiful:  The Carole King Musical
A Gentleman’s Guide to Love and Murder

A Gentleman’s Guide to Love and Murder was a cleverly presented Gilbert-and-Sullivan-like work, quite witty and charming and very well acted and directed, but Prof Miller sez the Tony goes to the musical that touched hearts—Beautiful:  The Carol King Musical.

For Best Director of a Musical, the nominees are:

In for a penny, in for a pound.  Since Prof Miller predicts that Hedwig will win best actor and best musical revival Tonys, then Michael Mayer gets the directing award.

For Best Book of a Musical, the nominees are:

All four of these musicals draw from earlier sources, but it looks like this is where A Gentleman’s Guide to Love and Murder will get its Tony.  The call is for Robert L. Freedman.

For Choreography, the nominees are:

After Midnight boasts some mighty fine dancing, but not all of it was choreographed by Warren Carlyle.  Going to go with Casey Nicholaw’s work on Aladdin for this one.

Stay tuned to June 8 to see how well Prof Miller’s predictions turned out to be.  As a reminder, last year, he (ahem) did better than either Charles Isherwood or Ben Brantley of The New York Times.

Posted by Howard Miller at 3:11 PM No comments: 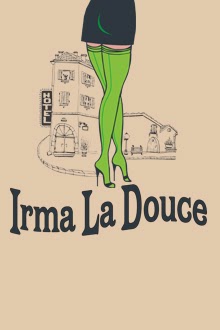 Irma La Douce is a French cream puff of a musical that should float and dance and soar like a kite caught in a rambling breeze. Unfortunately, despite the best efforts of the two charming stars at its center, the Encores! production rarely breaks loose from the tug of gravity and remains earthbound.

There have not been very many revivals of this show, which dates to 1956 and a highly successful run in Paris (4 years) and then London (3 years). It landed on Broadway in 1960 in a production that was helmed by renowned director Peter Brook and choreographed by Oona White. Starring Elizabeth Seal, Keith Michell, and Clive Revill, Irma La Douce was a moderate hit here, running a little over a year on Broadway before making the rounds of summer stock (which is where I happened to see it for the first time) before more-or-less disappearing, save for the original cast album (still in print).

The plot is really just an excuse to pull off a lot of silliness, dependent on a pretense that gets out of hand. Nestor le Fripé (Nestor “the disheveled”), a poor law student, falls in love with Irma, a highly successful prostitute.  But he quickly decides he no longer is comfortable with her career (which pays the bills for both of them), so he invents a rich older man, “Oscar,” who will become her only client, while Nestor will be her “mec” (pimp). The gag of the show is that “Oscar” is actually Nestor, donning a two-bit fake beard that somehow manages to fool everyone.

Things work out for awhile, but all that flip-flopping between  “Oscar” and Nestor is getting to be an exhausting enterprise for our hero, so he decides to get rid of “Oscar” by drowning him in the Seine. Immediately, Nestor is arrested for murder, is convicted, and is packed off to Devil’s Island, along with most of the rest of the cast. The show wraps up with a sequence of events worthy of the Marx Brothers that eventually reunites the two lovers once more.

I mention the Marx Brothers because that’s the level of wackiness it would take to pull off a winning production of Irma La Douce.  I envision actors swinging on ropes, falling from the rafters, and running up and down the aisles of the theater.  Alas, there is precious little of this kind of zany staging in the Encores! production, and, unfortunately, scenic designer John Lee Beatty, who is retiring after two-decades with Encores!, has chosen this time to build a solid fixed set, when sparse, fly-away pieces would better serve the style of the show.

Under John Doyle’s less-than-inspired direction, Jennifer Bowles exudes a great deal of charm as Irma, and shows lovely loose-limbed skill as a dancer in the two numbers that give choreographer Chase Brock the opportunity to let loose his imagination (the exuberant “Dis Donc” in Act I, and the absurdly improbable “Arctic Ballet” in Act II).

Rob McClure—a very gifted comic actor—tries his best to raise the level of fun as he manically switches between Nestor and “Oscar.” But truthfully he did something similar and with far greater success in the Encores! production of Where’s Charley three years ago, in which he transformed frenetically between the roles of the title character and his “aunt.”

What Irma La Douce has going for it is the original music by French composer Marguerite Monnot, including “Valse Milieu,” “Our Language of Love,” the Piaf-like title song, and the bouncy “Dis Donc.”  The always reliable Rob Berman conducts the small (10 players) orchestra performing the original score, allowing the delectable music to come shining through. The English language lyrics by Julian More, David Heneker, and Monty Norman are generally not much more than serviceable, though, and sometimes are forced to the breaking point in order to push a rhyming line.  Example:

It's clear to you, it's clear to me
This precious moment had to be
Other moments outclassing,
Guardian angels are passing.

I do believe a production in French (with supertitles if necessary) might do a better job of capturing the show’s helium-balloon spirit.


Feel free to tell you friends about this blog, and to share your own theater stories by posting a comment.

Posted by Howard Miller at 12:00 PM No comments: