'Picnic': Sparks But No Fireworks in Tame Revival 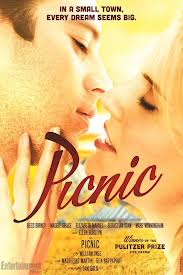 Where is James Dean when you need him?

That’s what I was thinking as I watched the workmanlike if uninspired production of William Inge’s 1953 Pulitzer Prize-winning play, Picnic, now in previews at the American Airlines Theater.

Inge’s domestic drama centers on a circle of family and neighbors in a small town in Kansas, where predictable lives are shaken up by the intrusion of an outsider, Hal. Hal is a combo pack of earthy masculinity, wild unpredictability, and  vulnerability that raises the temperature for the repressed women, already sweltering in the late summer’s heat.

Before Hal (Sebastian Stan) shows up looking for work as a handyman, plans are underway for the annual Labor Day picnic, a final fling before the start of the new school year.

We meet Flo Owens (Mare Winningham) and her daughters, the younger Millie (Madeleine Martin),“the smart one,” and her older sister Madge (Maggie Grace), 18, “the pretty one” whom Flo hopes to marry off to Alan (Ben Rappaport), a pleasant enough well-to-do college student with a bright future ahead of him. Madge and Alan do seem to be a well suited, albeit “safe” match, until Hal comes along.

As a dramatic character, Hal is the kind of young man who would have been portrayed in the movies by James Dean or Marlon Brando (though, as it happens, it was William Holden—arguably too old for the part—who famously took on the role in the 1955 film version of the play).

Hal has been hired to do chores for the Owens’ neighbor Mrs. Potts (Ellen Burstyn). He reminds her of her own rebellious days, and his frequently-on-view shirtless hubba-hubba torso clinches the deal.

As evening descends, it isn’t long before pretty girl Madge and pretty boy Hal get together, and sparks begin to fly.  Let’s just say, in appropriately 1950s euphemistic terms, they never do make it to the picnic.

The story of Hal and Madge has its counterpart with that of an older couple, Rosemary (Elizabeth Marvel), a spinster school teacher who boards with the Owens family, and her beau Howard (Reed Birney), whom she is determined to marry before she has to face one more day in the classroom.

The production, efficiently directed by Sam Gold, boasts solid performances by most of the cast.  Ms. Marvel and Ms. Burstyn are particularly compelling, despite the fact that their characters are built on clichés.

Unfortunately, in the central role of Hal, Sebastian Stan—best known for television and movie work (e. g. Captain America)—simply does not have the acting chops to pull this off. While his abs are certainly ogle-worthy, Stan provides precious little of Hal’s wild streak, and the heat between him and Ms. Grace wouldn't boil a pot of tea.

Theatergoers have an interesting opportunity to compare Inge’s work with that of Clifford Odets, whose Golden Boy is currently receiving a solid production a few blocks away at the Belasco. Where Odets contextualizes his play in broader social themes, Inge narrows his focus to life’s everyday dramas.

In the right hands, domestic dramas can be quite potent. Think of Inge’s contemporary, Arthur Miller, or imagine what Tennessee Williams might have done with a character like Hal.  But in Picnic—at least as evidenced in this production—there is precious little at stake and not nearly enough combustion to trigger a drama-worthy flameout.  In the end, when Madge decides to chase after the departed Hal, the strongest sentiment she can muster is “he needs me,” and the best we can say to Madge is, “good luck."

Feel free to tell your friends about this blog, and to share your own theater stories by posting a comment.
Posted by Howard Miller at 9:24 PM No comments:

'Golden Boy': No Knockout, Perhaps, But A Real Contender

Who knows what motivates any of us to want the things we want, to do the things we do?  And, in the end, does it really matter—or is it only the trajectory of our lives that is important?

These are real questions to ponder while watching the well-acted but not quite three-dimensional revival of Clifford Odets’s Golden Boy (first produced in 1937), now on view at the Belasco Theater.

Odets is not a subtle playwright. He has big things to say about working class families, the transformative influences that shape first generation Americans, the pull of ambition, and the struggle to find one’s place in life. He paints with a broad brush, the theatrical equivalent of his art world contemporaries like Thomas Hart Benton or Diego Rivera.  As a playwright, Odets, a strong proponent of method acting, leaves it up to the director and the actors to breathe life into the characters—something that had not quite come to pass during the preview performance I attended.

In Golden Boy, we are presented with two lost souls:  Joe Bonaparte (Seth Numrich) and Lorna Moon (Yvonne Strahovski), whose lives become entangled when Joe, a gifted young violinist, abandons his path—one that has been shaped by his immigrant father (Tony Shalhoub, giving the most grounded performance of the large and talented cast)—in order to pursue fame and fortune.

One gets the sense that Joe might have gone in any number of directions to feed his itch of ambition and his desire to prove himself in a world where being a sensitive young violinist brands you as something of an outcast and less than a man.

As it happens, the particular escape hatch he has gone through leads him into the world of professional boxing, and we watch him transfer himself from his father’s loving hands into the less loving ones of the hard-scrabble boxing promoter Tom Moody (Danny Mastrogiorgio), the kind-hearted trainer Tokio (Danny Burstein), and the mobster Eddie Fuseli (Anthony Crivello), who buys a piece of the action and wants to own Joe outright.

Joe’s counterpart, Lorna, works for and is the lover of Tom Moody. Lorna’s motivation is presented more clearly than Joe’s.  She has grown up in a terribly dysfunctional family—an abusive father and a mother who committed suicide. She has hooked up with Tom, who seemingly loves and needs her in a way that she finds hard to resist, so that she hardly considers her own feelings at all.

Joe is one of theater’s “angry young men,” triggered by something deep that neither he nor the playwright is able to name.  As his father—loving, supportive, yet helpless to prevent the oncoming train wreck—says of Joe, “he gotta wild wolf inside…eat him up!”  Lorna has a bit of that wolf inside of her as well, and it is inevitable that she and Joe are drawn toward one another, just as their lives inevitably spiral out of control.

Odets liked to write big ensemble works, where he could set his central characters amidst family, friends, and acquaintances, whose comings and goings add richness to the larger themes.  In addition to Joe, Lorna, Tom, Tokio, Mr. Bonaparte, and Fuseli, there are Mr. Carp (Jonathan Hadary), Mr. Bonaparte’s Schaupenhauer-quoting neighbor; Anna (Dagmara Dominczyk) and Siggie (Michael Aronov), Joe’s sister and brother-in-law; Frank (Lucas Caleb Rooney), Joe’s union organizer brother (gotta have at least one of those in an Odets play!), plus more than a dozen others to round out the cast.

All turn in solid performances, and director Bartlett Sher has done a masterful job of keeping things nicely paced, so that the nearly three hours of running time seldom make you want to look at your watch.  However, I do find the direction to be a bit fussy and occasionally excessive.  Sher makes frequent use of period music (to remind us over and over that this is taking place in the 1930s?), and stages several boxing gym scenes that fill the stage but are really a bit much.  Interestingly enough, however, he chooses to underplay elements of homoeroticism and homophobia that thread through the play.

I don’t want to downplay the strengths of the production.  In his lifetime, Golden Boy was Odets’s most popular work, and it is not hard to understand why.  The characters, while perhaps not fully developed, are nonetheless engaging, and the current cast is very good throughout. I would imagine that over the next few weeks, more of the actors will deepen their performances, as Tony Shalhoub has already done.  As they say in the boxing world, Golden Boy is a real contender, well worth plunking down the price of a ringside seat.

Feel free to tell your friends about this blog, and to share your own theater stories by posting a comment.
Posted by Howard Miller at 8:35 PM No comments: