'The Weir:' Kudos to the Irish Rep For This First-Rate Revival 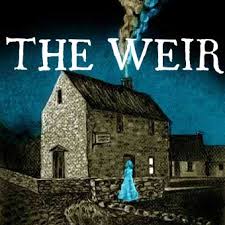 Playwright Conor McPherson has a way with the supernatural.  Ghosts, faeries, and even the Prince of Darkness inhabit his works. I’ve got to say, though, that I’ve never been fully engaged by these stories, resisting the call to suspend my disbelief against the Twilight Zone-iness of it all.

Until now, that is, thanks to the Irish Rep’s splendid revival of McPherson’s The Weir, directed most masterfully by Ciarán O'Reilly and performed by a rock solid company of actors.

There are two reasons for my embracing of The Weir, and for my touting it here as among the best productions I’ve seen during the 2012-13 theater season.

The first has to do with the play itself.  Admittedly, a one-sentence description makes it sound pretty lame:  five characters in an Irish pub take turns telling scary tales around the wood-burning stove (a stand-in, of course, for the requisite campfire).

What makes these tales effectively chilling, however, is that no one—neither the characters nor the audience—is obliged to take them at face value, something that is not true of the more recent Shining City and The Seafarer, where ghosts and Satan himself are part of the dramatis personae.

The stories in The Weir, for all their folklore origins, are manifestations of the loneliness and isolation that are rife in the forsaken rural area of Ireland where the characters all live.

Four of the pub's habitués are men who have known each other forever, and their drink-lubricated conversations are  comprised of what are undoubtedly well-worn rituals of idle chitchat, gossip, and baiting.  It is the presence of the fifth person, a stranger and a woman to boot, that changes the tone of the evening and gradually sets the scene for the stories of disturbing brushes with the netherworld.

From a playwriting perspective, McPherson has done a beautiful job of building up the underlying sense of anxiety, tedium, and loneliness faced by the pub’s owner Brenden (Billy Carter) and two of the regulars, the cantankerous Jack (Dan Butler), and Jack’s handyman assistant Jim (John Keating).

Also on the scene is the more affluent and somewhat pompous businessman, Finbar (Sean Gormley), the only one of the men who is married and does not have to return to an empty home.  It is Finbar who brings the newly arrived Valerie (Tessa Klein) with him to the pub, setting tongues wagging in speculation about his motives.

Each of these characters takes a turn at center stage, and whatever tensions that might exist among them, their stories and accompanying moments of vulnerability are treated with great respect by the others.   And, glory be, if it isn’t the stranger among them whose own heartbreaking tale gets all of the men to set aside their blarney and listen in silent awe.

I did say there were two reasons to admire this production.  The second has to do with the attention to detail that has gone into the directing and the acting. Every moment feels right, from the early awkwardness of the conversations before drinks have loosened tongues, to the roughhousing among the men and their later efforts to behave like gentlemen in front of Valerie, to the way in which the others react to Valerie’s asking for white wine in this pints-and-whiskey pub.

As you watch the play unfold, you can tell these are not natural comrades, but you can nonetheless see why it is they come together.  They seek companionship and a bit of liquid courage to stave off the encroaching darkness. The tasks of the day may successfully mask incipient dread, but the nights are long indeed.

Long ago, I spent many hours of my misspent youth at a tavern where, over the entrance, there hung a sign reading “Where Strangers Meet Friends.”  By the time Brenden put out the lights and the parties exited for the night, that is exactly the feeling the production had engendered.

Kudos to all who have brought The Weir to life on the intimate stage of the Irish Rep.  In addition to the cast and director, I would like to tip my hat to Charlie Corcoran for his perfect set design, and to Drew Levy for the sound design that incorporates a background of desolate winds that add immeasurably to the atmosphere.

Bravo, and may the road rise to meet you!

Posted by Howard Miller at 8:46 PM No comments:

It stands to reason that, having written a highly successful play called Cock, the playwright Mike Bartlett could not resist calling his next one Bull.  Since the running time for the former is 90 minutes, and for the latter it is 50 minutes, you know it won’t be long before they will be paired up for a theatrical evening under the title 'Cock and Bull.'

That particularly bit of marketing silliness aside, the two plays are good companion pieces, with a shared depiction of human competitiveness as blood sport.

Cock depicted a sexual triangle (a man and woman fighting over another man).  Bull, on view at the 59 East 59 Theater, moves the battleground to the workplace, though with the same combat-to-the-death theme.

With Bull, we get a ringside view of three employees of an unnamed corporate entity who are at the endgame of vying over the two positions that will remain after a round of downsizing. Call it musical chairs with real consequences.

It is clear from the get-go who will be discharged, as two of the players have joined forces like members of a wolf pack closing in on a wounded zebra.  Anyone who has ever worked in a hostile work environment (and let’s face it, who hasn’t) will recognize the antagonists: Tony, the self-confident arrogant bastard, and Isobel, the vicious piece of business determined to claw her way to the top regardless of collateral damage. Poor Thomas, the intended prey, doesn’t stand a chance against these armed-to-the-teeth backstabbers.

The play takes place in a waiting area shortly before a meeting with the boss.  Almost from the outset, Tony and Isobel start in on Thomas, denigrating his appearance, alternately withholding information and lying altogether, and thrusting their verbal lances like picadors in (naturally) a bullfight.  “Stop shuffling around like an autistic penguin,” Isobel tells him, while criticizing his suit and pointing out a non-existent blotch in the corner of his mouth.  They behave, in short, like a pair of nasty-ass middle school bullies.

This really is all there is to the play. Tony and Isobel keep up their thrusts and jabs until the boss shows up and Thomas—knowing he doesn’t stand a chance—lashes out uncontrollably (for which you might feel the urge to send up a mighty cheer), though, of course, he ends up the perfect and inevitable victim.

What makes this well worth the visit is the exquisite performances by Adam James as Tony, Eleanor Matsuura as Isobel, Neil Stuke as the boss, and, especially, Sam Troughton as Thomas, who starts out without much self-confidence and gradually melts into a twitching and trembling mass of gelatin under the cruel ministrations of his “colleagues.”  It comes almost as a surprise that Mr. Troughton is able to stand up to take his bow.  Director Clare Lizzimore has done a fine job of keeping the level of tension high.  Clever idea to pump up the audience by using the well-known theme music from the movie Rocky III as a lead-in.

If you go, be sure to ask for a “standing room” ticket.  That will give you a place around the square of Plexiglass set up like a boxing ring and give you the closest and best view of the goings-on.  You will not be able to tear your eyes away.  Plan on dinner or drinks afterwards; the evening will still be young and you will have much to talk about.

Posted by Howard Miller at 8:51 PM No comments: