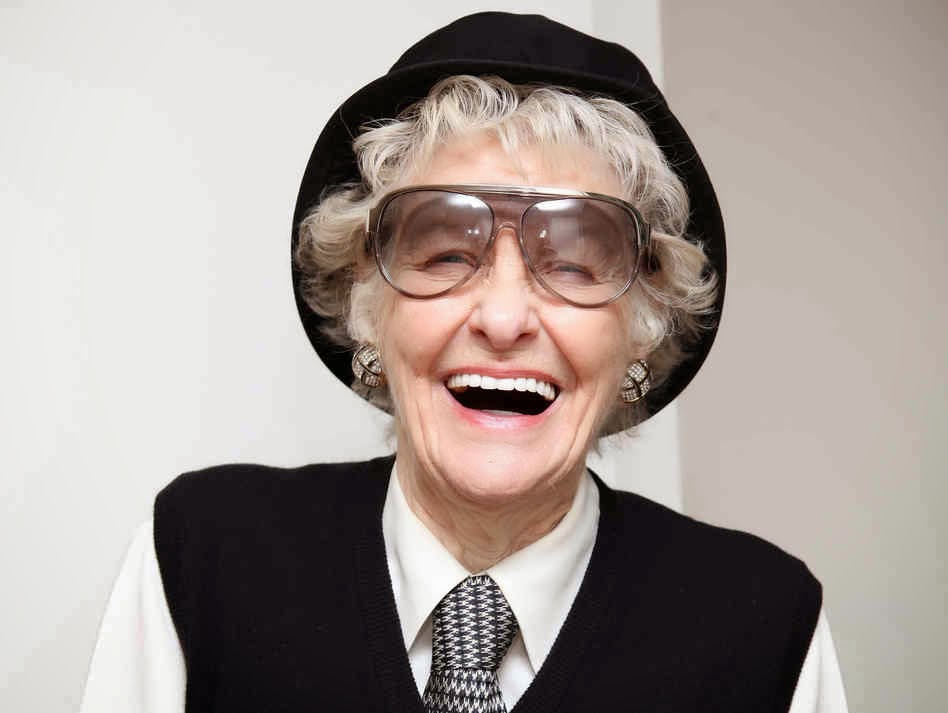 Tonight they dimmed the lights on Broadway in honor of Elaine Stritch, who passed away yesterday at the age of 89.  Even without the salute, the lights will be a bit dimmer without her living presence.

Stritch’s reputation was that of a tough old broad with an inexplicable talent that could both attract and repel. She appeared in movies and television, of course, but always and ever she was a Broadway baby, a what-you-see-is-what-you-get mix of chutzpah and vulnerability who could charm the cream from a cow or scare the manure out of it. As playwright/actor Harvey Fierstein tweeted yesterday, she was  “a great pain in the ass [who] cooked with atomic power.”

My only non-theater encounter with her showed me a bit of both one late night a few years ago. As I was walking south on Fifth Avenue, she was headed north, accompanied by a young woman who I imagine had been entrusted with getting her home safely to the Carlyle. But Stritch would have none of being fussed over, and was clearly in a foul mood as she used some of that atomic power to lash out at her assistant. I decided this was not a good time to express my admiration, and so I kept on walking like any good New Yorker, pretending not to notice.

Pain in the ass she may have been, but there is no doubting she was a  amazing performer, with the uncanny ability to sell anything through the act of selling herself.

She will always be remembered for “The Ladies Who Lunch” from Stephen Sondheim’s Company, and I did see her in that show a couple of months into the run. But what made the performance an indelible piece of theater history is the unforgettable filmed recording session for the original cast album, in which she struggled mightily to get a good take of the song. Check it out at https://www.youtube.com/watch?v=Gf52APstI0A and see what I mean about chutzpah and vulnerability.

I first discovered Stritch through recordings of Goldilocks (1958) and Sail Away (1963). I was barely into my early adolescence when Leroy Anderson’s Goldilocks came out, and while I did not see it, it became a much listened to album during my regular visits to the library’s listening room in my hometown of Baltimore. By the time Sail Away opened, I was already a regular theatergoer, though again I only knew this Noël Coward work from the recording (by then, I had quite a growing collection of original cast albums).  When most people speak of Stritch’s work on Sail Away, they single out the song “Why Do The Wrong People Travel,” but I was more taken with a novelty number called “The Little Ones’ ABC,” which she sang in her role as a cruise ship social director stuck with caring for a group of bratty children. The tone of tooth-sucking exasperation and sarcasm with which she sings it left a permanent image of the performer in my mind. Again, a link:  https://www.youtube.com/watch?v=pEWXd-_wdjU

I also enjoyed her performance as Cap’n Andy’s cranky wife Parthy in Hal Prince’s lavish 1994 revival of Show Boat. In it, she was given the song “Why Do I Love You” to sing as a lull-a-bye to her infant granddaughter. It did seem out of character, but she did a fine job. I do recall, however, reading a review in which the critic said that he had been afraid she was going to eat the baby instead of sing to it.

Fast forward to more recent appearances, I will always remember her singing “I’m Still Here” during Stephen Sondheim’s 80th birthday bash at Avery Fisher Hall in 2010 (Stritch was 85 at the time). When she took center stage, she looked so frail, I wasn’t sure she’d make it. She was tentative at first, but as she got into it, she dropped 20 or more years from her appearance and from her voice and absolutely nailed it, to loud and rapturous applause.  At that gala, it was Patti LuPone who sang “The Ladies Who Lunch,” and she fearlessly sang it directly to Stritch. On the line “does anyone still wear a hat?” Stritch smiled and tipped her hat. Another priceless moment.

That was the same year Stritch took over the role of Mme. Armfeldt from Angela Lansbury in A Little Night Music.  During the early weeks of her performances, the buzz was all about her inability to remember the words to her big and difficult number, "Liaisons," yet when I saw her in it, she pretty much nailed that as well.  She did it by incorporating her own frailness into her depiction of the elderly doyenne.

I regret missing her one-woman show At Liberty, which she performed to great acclaim and a Tony Award in 2002, but I can absolutely commend the recording of the show as a must-have, in which toughness and vulnerability and, at least so it seems, honesty come together in an extraordinary way. If you want to see the performance, that is available as well, and as of this writing, it can be seen at https://www.youtube.com/watch?v=15a5jz6J0lM


So farewell, Elaine Stritch. Your journey through life in the public eye was a force of nature to be reckoned with. May you rest in peace!

Posted by Howard Miller at 8:56 PM No comments: