DYING FOR IT: Hope For The Best; Expect The Worst 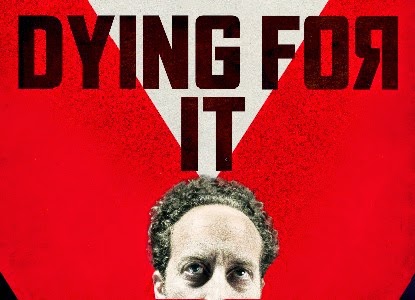 It’s probably safe to assume that Joseph Stalin did not have much of a sense of humor. Too bad. Because if he did, he might have gotten a kick out of Dying For It, Moira Buffini’s free-flowing comic adaption of Nikolai Erdman’s banned 1928 Soviet-era satire The Suicide, now on view at the Atlantic Theater Company's Linda Gross Theater.

At the opening, and at various points during the play, a duo of excellent musicians (Nathan Dame and Andrew Mayer) sets the mood with Josh Schmidt’s original Russian-style music on violin and accordion. But cast aside images of Fiddler on the Roof and think instead of Mel Brooks’ The Twelve Chairs and the song he composed for it (“Hope for the Best. Expect the Worst”) and you will have a pretty good idea of what’s in store for you—a very funny slapstick comedy about a down-in-the-mouth nebbish (perfectly embodied by Joey Slotnick) determined to end his empty life.

Slotnick’s character, Semyon Semyonovich Podeskalnikov (everyone has one of these wonderful tongue twister Russian-esque names), is the perfect kvetch. In the opening scene, he starts whining in the middle of the night for a piece of blood sausage that he had refused to eat at dinner because eating in front of his loving, if exasperated, wife Masha (Jeanine Serralles) makes him feel like a parasite. It seems he cannot find work and is dependent on Masha’s salary to survive. Of course, this doesn’t stop him from waking her when he is feeling hungry.  (“You are crucifying me with blood sausage!” he complains.)

Driven to histrionic despair after a failed attempt at channeling his hopes into a potential career as a tuba player, Semyon acquires a gun and announces his intention to off himself. Word quickly spreads, and suddenly the self-proclaimed “flea in the flea pit” finds himself elevated to the status of soon-to-be martyr for any number of causes, as various characters try to help him shape his suicide letter to suit their purposes. ("You must shoot yourself as a responsible member of society," he is told.)

Thus, Aristarkh Dominikovich Grand-Skubik (Robert Stanton) wants Semyon’s last words to be a plea on behalf of the intelligentsia; Kleopatra “Kiki” Maximovna (Clea Lewis) wants him to die in the name of romantic love; others want him to kill himself for lack of meat, or on behalf of the “beggars and the mad.” All of the sudden, Semyon is the most important man in town, the one person who need not fear speaking out.

This all plays out in a flurry of low comedic gallows humor and all around great fun by the first-rate cast under Neil Pepe’s spot-on direction. Mr. Slotnick, with his hangdog expression and deadpan delivery, shines as Semyon, but, really, this is a wonderful ensemble effort.

In addition to the cast members I’ve already identified, there are splendid performances by Mary Beth Peil as Semyon’s mother-in-law; Peter Maloney as Father Yelpidy, a priest who envisions himself preaching a great sermon on the occasion; and Patch Darragh as Viktor Viktorovich, the “people’s poet,” who is readying an epic work in the name of the new celebrity. The other denizens of the wonderfully drab and dreary Soviet apartment building concocted by set designer Walt Spangler are Mia Barron, CJ Wilson, and Ben Beckley. Mr. Beckley plays the one true Soviet functionary, a postman whose claim to fame is his award for “speed and diligence” and whose ultimate fate adds a twist of a denouement to the proceedings.

With Dying For It, the thin line between despair and comedy is in deft hands.The jokes may occasionally veer toward the hoary, but everyone involved in this production understands that all is dependent on precise and straight-faced delivery and timing. They absolutely deliver the goods.

Feel free to share this blog with your friends, and to share your own theater stories by posting a comment. Upstage-Downstage is proud to announce it has just passed the 50,000-visitor mark.
Posted by Howard Miller at 6:54 PM