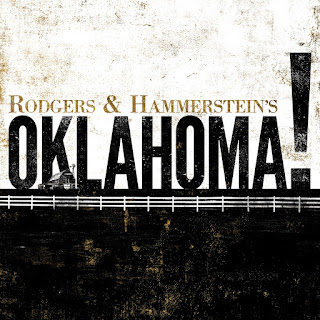 If you think you know Rodgers and Hammerstein's classic musical Oklahoma!, think again. Because the new Broadway production at Circle in the Square in an eye-opening humdinger of a show that explores the darker side to the story and even reshapes the score into music that might very well have been performed in Oklahoma Territory, circa 1907, just before it joined the Union and became a state.

The last time I saw this old warhorse was in 2002.  Coincidentally, that production, imported from London though with most of the cast replaced (alas, no Hugh Jackman as Curly), played right next door to the show's current home, at the Gershwin Theatre, where Wicked has become a seemingly permanent fixture.

That was an enjoyable production, but it mostly stuck to the tried and true.  But hold on to your spurs and chaps, folks, because director Daniel Fish has rethought just about every aspect.

Some will find it unacceptably different, what with the on-stage musicians performing as if at a hoedown and with many of the songs being given a country and western flair.

But the new orchestrations by Daniel Kluger are just right for this production, and the youthful cast is just about perfectly suited for capturing the heart of the show.  Damon Daunno is full of cocky charm as Curly, and Rebecca Naomi Jones is both scrappy and dreamy as Laurey. James Davis and Ali Stroker make for a perfect comic team as the goofy Will Parker and Ado Annie, the gal who cain't say no. Mary Testa as Aunt Eller is kind, tough, eminently practical yet fixated on making sure things stay within the boundaries she sees as uncrossable. And Patrick Vaill gives us a Jud Fry who is psychologically complex, as much a threatening figure as he is a victim of the society that has shunned him all his life.

I'd be remiss if I didn't point out that there is an unexpectedly disturbing ending that takes us out of the naturalism of the story and into a more symbolic realm, and the famous dream ballet has been completely rethought by choreographer John Heginbotham so that it bears not the slightest resemblance to Agnes de Mille's original version.

But, truly, I don't recall ever having such a thrilling experience at a revival of an old familiar musical as I had in seeing this production of Oklahoma! It makes me wonder what the director, Mr. Fish, might do with Carousel. 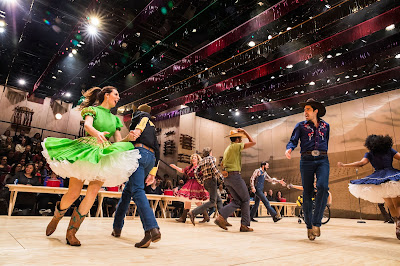 Posted by Howard Miller at 9:30 AM