THREE ACTRESSES WHO ARE BURNING UP BROADWAY AND OFF-BROADWAY STAGES

If you want to see some humdinger performances on or off Broadway these days, better turn to the women.  Here are three you won't want to miss: 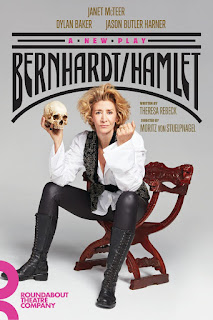 First up:  Janet McTeer in Theresa Rebeck's Bernhardt/Hamlet at the American Airlines Theatre, one of the Roundabout Theatre Company's Broadway houses. This one is smack dab in the heart of things, on 42nd Street between 7th and 8th Avenues.

Ms. McTeer is mesmerizing as the great 19th French actress Sarah Bernhardt, who is preparing to perform the title role in Hamlet. Of course, she is surrounded by idiotic naysaying men who want to "protect" her from what they assume will be a public humiliation and the ruination of her career. Not hard to guess where this will go.

Anyone looking for a straightforward and historically accurate portrait of the actual Bernhardt had best visit the library. But this isn't a biography, it's a play. And a damned good one at that.

No bones about it. Janet McTeer is ideally cast and gives a

performance that -- although it is ridiculous for me to make this prediction so early in the season -- will surely bring her a Tony nomination. Ironically, her stiffest competition might be last year's winner, Glenda Jackson, who is returning in the title role of yet another Shakespeare tragedy, King Lear.

Let us move Off-Broadway next, with the fabulous Edie Falco starring in Sharr White's heated political drama The True, a production of The New Group at the Pershing Square Signature Center, further west on 42nd Street close to 10th Avenue.

In The True, Ms. Falco plays the real-life Polly Noonan, the long-time adviser and close personal friend to the mayor of Albany, New York. The play takes place in 1977, when, after more than three decades in office, the mayor and the woman behind the throne are heading into a primary election battle that promises to be a fight to the death. 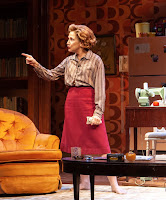 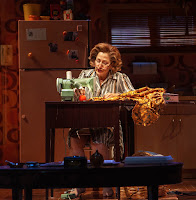 Ms. Falco is giving a truly powerhouse performance as Polly Noonan, who, as it happens, was the grandmother of U. S. Senator Kirsten Gillibrand. They way she charges forth like a fire-breathing dragon,  the guys who try to get in her way don't stand a chance in the world.

A word of caution:  Polly Noonan's was known for lacing her conversations with profanity, and Ms. Falco drops F-bombs like they were breadcrumbs being fed to the pigeons. But, wow, what a performance!  They don't give Tonys for Off-Broadway productions, but they do give Obie and Outer Critics Circle and Drama Desk Awards. Expect to hear the name of Edie Falco come nomination time. 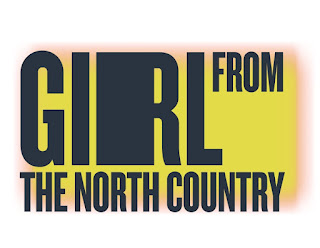 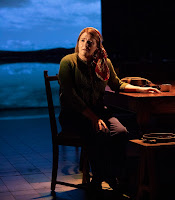 Last, but by no means least, is the equally wonderful Mare Winningham, who is giving a knock-out performance as  one of the lost and broken victims of the Great Depression, in the Conor McPherson/Bob Dylan collaboration Girl from the North Country. This one is downtown at the Public Theater, but it really is easy to get to by public transportation. Or you could take the risk based on whispers that the show may move uptown to a Broadway house. But if you miss it, it's on you! (Remember, a little thing called Hamilton started out at the Public.)

Girl from the North Country is an ensemble piece, and it boasts an altogether excellent cast and musicians who perform songs from Bob Dylan's vast trove. But rising above the rest is Ms. Winningham.

Her character, Elizabeth, is said to be suffering from dementia. My take is, that's just a two-bit diagnosis that allows her husband to self-justify an affair he is carrying on right under her nose. I actually found her to be as sharp as a tack and hope you will as well.

I have seen Ms. Winningham in many plays before, but this is the first time I've heard her sing. So let me end by saying that when she performs Dylan's "Like A Rolling Stone" at the end of Act I, and "Forever Young" at the end of the evening, you might want to have some tissues ready; you or the person sitting next to you may very well need them.

Posted by Howard Miller at 9:30 PM