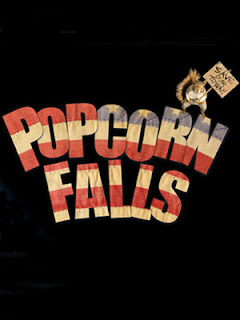 Popcorn Falls, opening tonight at the intimate Off-Broadway Davenport Theater, is a clever, fun and delightfully unpretentious play about small town folks with big dreams and even bigger hearts. It also is, blessedly, a snark-free breath of fresh air at a time when it seems that everywhere we turn these days, we are faced with raised fists and angry rants. The worst you'll get from the citizens of Popcorn Falls (who like to refer to themselves as its "kernels") are a few quibbles.

Written by James Hindman and directed by two-time Tony winning actor Christian Borle,  Popcorn Falls is the saga of a town that is hovering on the brink of bankruptcy; its one tourist attraction, the waterfall after which it is named, has dried up, thanks to a dam that was built upstream.

With two performers bravely playing 21 different characters, along with a minimal set design (there's a perfect explanation for why both of these are so), Popcorn Falls is bound to have a long and successful life at regional and community theaters around the country. In fact, it had its premiere at the Riverbank Theatre in Marine City, Michigan, with the playwright himself in the role of the beleaguered new mayor of the beleaguered title town, one Mr. Trundle.

Here, that part is being played by Adam Heller.  He also plays a few of the other "kernels," but the bulk of the mayhem of quick changes is carried out by Tom Souhrada, who has been with the play from the start. He has perfected the chameleon-like role that requires him to morph among individuals of varying ages and genders on a moment's notice.


The fate of Popcorn Falls lies precariously in the hands of the greedy Mr. Doyle, who heads up the county's budget committee and who intends to take advantage of the situation by letting the town collapse and then putting up a sewage treatment plant. The only thing that stands in the way of his scheme is a previously-approved arts grant that is tied to establishing a community theater and putting on a play. Doyle can't stop the grant directly, but he can attach a requirement that will allow him to yank the money by setting a deadline for getting both the theater and the play up and running within one week.

Small problem: There is no actual theater. There is no play. There is no one with more than minimal acting or directing experience or, really, anyone who knows much of anything about how to make this happen.

The bulk of the play becomes a farce-like race to make the impossible come to fruition. There is lots of slapstick fun as things unfold, but more than that, there is a real warmth behind the fun as we get to know the characters.

As calm and in control as Mayor Trundle seems, we learn he is a recently divorced recovering alcoholic who has come to Popcorn Falls to get back on his feet.  But we also get to know many of the other residents. Among them are Joe the flustered janitor, whose wife is expecting their third set of twins; Ms. Parker, the cat-loving town librarian who has dramatic pretensions and whose conversations include blithely tossed about quotes from such unexpected sources as Angels In America; Floyd, the owner of the local lumberyard who is drafted into building the sets; and a very sweet young woman named Becky, who has reluctantly returned to her hometown after a failed attempt at attending an acting program.

Thanks to the performances by Heller and Souhrada, who sometimes have to trade off characters in order the keep the juggling of roles going non-stop, the stage seems to be filled with the entire population of Popcorn Falls as Mayor Trundle attempts to build up everyone's enthusiasm to pull off the impossible.

When all is said and done, you will realize there has been a great deal of creative magic going on before your eyes, with a cast of two most impressively creating a world of characters with nothing but their talent, the playwright's lovely script, and Christian Borle's direction. Popcorn Falls makes for an altogether charming, fun, and pleasurable evening of theater.

Posted by Howard Miller at 7:31 PM