MEASURE FOR MEASURE: Not A "Problem Play" If You Understand That All's Well If It Ends Well 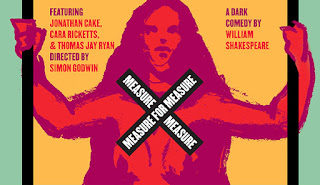 Measure for Measure is generally thought of as one of Shakespeare's ambiguous "problem plays," but if you accept that, at its heart, it actually is a comedy (its "official designation" in the canon), you will find much to like in director Simon Godwin's interpretation in the Theatre For A New Audience production, now on view at the Polonsky Shakespeare Center in Brooklyn.

The play does have its share of fools and clowns, and Godwin puts a lot of energy into bringing out the humorous elements, with fine comic turns by Kenneth De Abrew as the drunkard Froth; Zachary Fine as the dim-witted constable Elbow; Christopher Michael McFarland as the pub keeper Pompey; and, especially, Haynes Thigpen as the self-aggrandizing, "fake news"-mongering, foot-in-his-mouth Lucio.

But what truly makes Measure for Measure a comedy is its adherence to the age-old comic arc by carrying us on a journey from a world that is "out of joint" to one where the classically-understood natural order of things has been restored.

The frame for Measure For Measure goes like this: The Duke of Vienna (Jonathan Cake) has allowed the city's very strict laws to fall by the wayside and go unenforced for a long time. Debauchery has become the norm, and brothels and taverns are the city's leading businesses. The time has come to clean things up. Unfortunately, the Duke is in a predicament; he does not know how he can do this on his own, since he was the one who let things get out of hand in the first place.

So he hatches a plan. He will turn things over to his deputy, the reliably uptight and unbending bureaucrat Angelo (excellently portrayed by Thomas Jay Ryan), who will make sure all laws are rigorously and unequivocally enforced. For his part, the Duke will pretend to go on a journey, but will secretly hang around in disguise (as a monk) in order to observe how things unfold. Once everything has been cleaned up, he will return, ready to resume his authority in a restored universe.  No harm, no foul - and the classic definition of comedy will have been fulfilled.

Of course, the duke is no sooner out of the immediate picture, when things start to go awry. This is the "problem" part of the play. Angelo, the obedient right-hand man, is ill equipped to brandish his new prerogative. He is the embodiment of the adage that "power corrupts," and the power he now wields brings out the worst in him.

The trigger that sets Angelo off comes in the form of Isabella (Cara Ricketts), a novice at a convent, who learns that her brother Claudio (Leland Fowler) has been sentenced to death for the all-to-common "crime" of fornication. She approaches Angelo, beseeching mercy, but he rebuffs her -- until he finds himself filled with lust for her, and he strikes a deal: Claudio's pardon in exchange for her virginity.

Much has been made over a very long period of academic discourse regarding this no-win situation, and this production does a fine job of laying out the arguments related to either possible decision for Isabella - in moral, religious, legal, and ethical terms. Not to overanalyze things, but it is clear that Isabella, as a women in this particular place and time, has few options, not even the option of being believed should she seek redress above Angelo (a point that resonates even today; think of the hung jury in the Bill Cosby sexual assault case, among others).

But back to Shakespeare. His genius here lies in forcing Isabella into this terrible dilemma and then taking the play back to its roots by finding a way to restore order in the nick of time (the Duke to the rescue!)

Why the Duke takes so long to set things right, when he knows all along what is going on, is a real source of frustration for the audience.  But think of it this way. We know he's around. He interacts with the other characters throughout (albeit in disguise), and along the way, he learns what it means to be a wise ruler -- with the ability to measure the rule of law against the rule of mercy. This is the essential comic arc of the play, and in the end, when all is set right, it is the quality of mercy that emerges as the key element.

Any director grabbing hold of Measure for Measure needs to decide which side of the equation to play up - the comic or the problematic. A true balance is difficult to come by.  In this production, Simon Godwin leans toward the comic, playing up the clowning elements and downplaying, as much as possible, the play's darkness.

Things get a bit muddied as a result, and the production goes overboard by drumming up audience participation, including sending us on a pre-performance walk through a "bordello" (though it looks more like an exhibit at the Museum of Sex); engaging us in some flag waving; and inviting some to come onstage to sit at cafe tables while a band called "The Lusty Puddings" plays a short set of songs that use Shakespeare's words, with music by the show's sound designer Jane Shaw.  Fun stuff, but it doesn't add much to the overall experience or shed light on the proceedings.

Still the cast is a strong one. Jonathan Cake, a classically trained actor, does a fine job portraying the growing maturity of the Duke's personality (he'd make a good Prince Hal). Cara Ricketts is quite perfect in the difficult role of the tormented Isabella, who is dragged from grief to hope to joy over the course of the evening. Haynes Thigpen excels as Lucio. And Thomas Jay Ryan, is outstanding as the conflicted Angelo, giving his hiss-worthy character a surprising degree of complexity as he falls into the trap of power.

Posted by Howard Miller at 3:46 PM

Email ThisBlogThis!Share to TwitterShare to FacebookShare to Pinterest
Labels: Measure for Measure, Theater for a New Audience