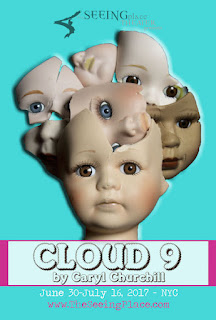 British playwright Caryl Churchill's magnificently complicated comedy, which flouts theatrical conventions as it skewers our perceptions of gender, race, time, and even logic, is being given an  edgy, seat-of-the-pants production by the always-risk-taking Seeing Place Theater company at the Access Theater.

Churchill herself has dictated that the performers cross genders (and, in at least one case, race) in taking on some of the roles, and that the same actors play different characters in each of the two acts, which are (sort of) separated by 100 years. Even the stage directions are read aloud (in this instance, by Clinton Powell and Mariel Reyes) so that we get the sense we are watching a rehearsal or backer's audition instead of a full-fledged theatrical production. Anything, in fact, to keep us focused less on the characters than on the ideas of sexuality, gender, power, and social pressure that are the underlying drivers of the play.

Act I takes place in a British colony somewhere in Africa in 1880, a place where, as one character puts it, "the climate is very confusing." That's as good an explanation as any for the goings-on.

To begin with, we have Clive (Brandon Walker), for whom duty and country and propriety are of foremost importance, except, of course, when he is diving under the dress of the neighboring widow, Mrs. Saunders (Jane Kahler). Then there is Clive's wife Betty (Ari Veach), who really does do her utmost to be the perfect Victorian spouse but who is equally eager to bed their friend, the explorer Harry Bagley (Robin Friend Stift)

And so, Act I devolves into a rather raunchy version of a French sex farce, but with racial, gender, and social undertones. Only Betty's mother Maude (Sabrina Schlegel-Majia) manages to cling to her old-school values, the very model of Mother England.

After the break, Act II takes us to 1980 London, with a set of characters living in an age of supposed sexual freedom and women's liberation. Some of the characters are newly introduced, while others seem to be the same ones left over from Act I (we're told by Ms. Churchill that, for the characters, only 25 years have passed). Again, bed swapping is de rigueur, and even more accepted and out in the open - but no less confusing and complicated to the participants.

No one truly knows how they are supposed to act with all of this new freedom. There is a wonderful moment here, for example, where one of the male characters, proclaiming himself to be a stalwart women's libber, practically bullies his wife into taking a job opportunity away from home when she doesn't want to do so. "God knows," he says, "I do everything I can to make you stand on your own two feet. Just be yourself. You don't seem to realize how insulting it is to me that you can't get yourself together.


It's all marvelous stuff, even if it is at times quite head-spinning. But as much as anything, Cloud 9 is an actors' play, with wonderfully juicy roles to sink their teeth into. To a person, the cast embraces its barely tamed wildness with all the gusto they can muster, giving the whole an exhilarating improvisational vibe.

Over the years, this still-organically-growing company has brought in some outstanding actors by living up to its mission of being actor-driven. While artistic director Brandon Walker and managing director Erin Cronican co-direct and perform in this production, they do not dominate the stage, which is shared by a uniformly strong cast, especially as they are required to leap across roles between acts. Rather than single out any individuals, kudos and applause to every last gender-race-age-and-sexually-fluid one of them!


Cloud 9 is scheduled to run through July 16 at the Access Theater, 380 Broadway. Be aware that the theatre's name is misleading, as it is located at the top of four flights of stairs.  Check ahead if you need use of the freight elevator.

Email ThisBlogThis!Share to TwitterShare to FacebookShare to Pinterest
Labels: Cloud 9, The Seeing Place