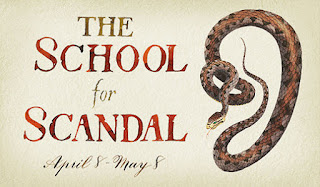 To start with, kudos to Charles G. LaPointe for yesterday’s well-deserved Drama Desk nomination, garnered for his wig design that is one of the many delightful details that mark Red Bull Theater’s rollicking production of Richard Brinsley Sheridan’s late Restoration comedy, The School For Scandal, at the Lucille Lortel Theatre.

As much as we have enjoyed Red Bull’s forays into the dark and blood-soaked world of Jacobean drama (The Duchess of Malfi, The Revengers Tragedy, The Changeling), it is a pleasure to be able to attend one of the company’s productions designed (and succeeding) solely at making us laugh – and with a play dating to 1777 to boot. The Colonists across the Atlantic may have been in revolt, but that didn’t prevent the patrons of the Drury Lane Theatre, or us, from delighting in the follies and foibles of characters who traded in the literal backstabbing of the Jacobean era for more stylish and gleeful gossip and social intrigue.

And what a marvelous bunch of prattling busybodies, pretentious rumormongers, and flingers of persiflage they are:  Lady Sneerwell, Snake, Mrs. Candour and the rest, all eager to dish and luxuriate in schadenfreude as one or the other of their circle gets enmeshed in some delicious scandal and subsequent public humiliation.

Lady Sneerwell (Frances Barber) is the queen bee of the coterie of meddlers and blatherskites.  As the play opens, she and her colleague Snake (Jacob Dresch, he of the green wig and slithering manner) are conniving to arrange a tryst between Maria (Nadine Malouf), the ward of an acquaintance, and the seemingly honorable Joseph Surface (Christian Conn). It’s not that she gives a fig for either of these young folks; she simply wants to keep Maria away from Joseph’s disreputable brother Charles (Christian DeMarais), whom she is eager to capture for herself.

Meanwhile, Maria’s guardian, Sir Peter Teazle (Mark Linn-Baker, who performs with his usual perfect comic flair) has his own problems trying to keep up with his much younger wife (Helen Cespedes). Lady Teazle is relishing her immersion into the world of upper class shenanigans and is on the verge of leaping into a tryst of her own, preferably with Joseph. For his part, Joseph is eager to get his hands on any money he can garner out of a relationship with Lady Teazle.

There are more twists to the convoluted plot than a pretzel on LSD, but suffice it to say, all works out happily in the end.

Periodically popping in and out of the story, Dana Ivey (bearing herself rather like Maggie Smith as the Dowager Countess of Grantham on Downtown Abbey) beguiles as Lady Candour, a woman who loves gossiping about the shamefulness of gossipers – and she is more than happy to name names to anyone who will listen. Also on board, and playing it to the hilt, is Henry Stram as Sir Oliver Surface, the uncle of Joseph and Charles who shows up in multiple guises to determine which of his nephews is trustworthy.

But really, the entire cast, under Marc Vietor’s masterly direction, is top-rate, and every little detail is nigh unto perfection. Mr. LaPointe’s wigs, for example, along with some shuffling of accents, allow Ben Mehl to shine as he plays four separate servants, roles that would otherwise fade into the woodwork if they hadn't been so fine-tuned.  Andrea Lauer’s detailed period costumes and Greg Plasma’s original jaunty music add greatly to this joyous production.

I would be remiss if I were not to point out that the production retains a few lines and situations that reflect anti-Semitic and racist attitudes. Be prepared for some such moments, but be prepared, as well, to accept them as reflections of the times in which School For Scandal was written, and enjoy the play for what it is – a jolly romp.

Posted by Howard Miller at 2:31 PM