BRIGHT STAR: Old Fashioned Musical With A Big Heart and a Shining New Star At Its Center 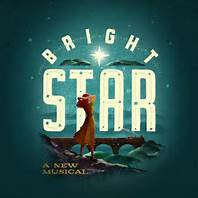 Dear Broadway theatergoer, please set aside your cynicism and let me tell you about the sweet and tender new musical at the Cort Theatre called Bright Star that is as embraceable as the lovely spring weather.

You probably already know that Bright Star is the result of a collaboration between two celebrities with no prior experience writing a musical: singer-songwriter Edie Brickell and comic, actor, and occasional story and play writer Steve Martin.

If you need reminding, Mr. Martin’s most famous brush with songwriting fame came in 1978 with the novelty number “King Tut,” while Ms. Brickell’s biggest hit, “What I Am,” dates to a decade later when she sang with a group called The New Bohemians.  So some initial cynicism about their capacity to write a Broadway musical is understandable.

But bear with me.

For in the ensuing years, Mr. Martin began to delve most seriously into his lifelong love of banjo music. He began touring with a bluegrass group, the Steep Canyon Rangers, picking up the top award of the International Bluegrass Music Association in 2011. Eventually, he joined up with Ms. Brickell, and together they produced a couple of bluegrass albums.

So it comes as no surprise that Bright Star boasts a lively and lovely bluegrass score, performed here by a gifted orchestra under the baton of Rob Berman, an accomplished theatrical musical director possibly best known to New Yorkers for his stellar work with City Center’s Encores! productions. If you like the toe tapping sounds of banjos, fiddles, and guitars, there’s plenty of that on hand, and it’s all good.

Of course, there is more to a musical than the music. The story Brickell and Martin tell falls in tone somewhere between realism and folk tale, a mix that doesn’t always blend smoothly (possibly director Walter Bobbie could have done a better job joining the seams) but one that gets the job done and opens the way for the excellent cast to win our hearts as they take us back and forth in time between the 1920s and the year 1945-46, immediately following the end of World War II and the homecoming of the troops.

With Bright Star, the “home” in homecoming is in rural North Carolina, with side trips to the city of Asheville. We follow the lives of two separate but ultimately intersecting couples, whose connection becomes clearer as the show progresses.  (You’ll probably have your own “aha” moment well before the big reveal, but that won’t stop you from appreciating its impact on the characters when they work it out for themselves).

At the center of Bright Star is the show’s own bright star, Carmen Cusack, making a most impressive Broadway debut as Alice Murphy, the strong-willed editor of a major literary magazine, whose story of loss and redemption this is. Hers is one of those magical debuts that can launch a performer to stardom, and you will know it from the moment she opens her mouth to deliver the opening song, “If You Knew My Story,” through to the show-stopping 11 o’clock number, “At Long Last.” That song, one of two with both music and lyrics by Ms. Brickell, is a real highlight and nearly redeems her overreliance on generally (and probably intentionally) folksy and repetitive lyrics that can get under your skin.

As good as she is, Ms. Cusack does not carry the show alone. A. J. Shively exudes down-home charm as Billy, the young man back from the war and eager to make a name for himself as a writer. Paul Alexander Nolan is excellent, as well, as Alice’s great love Jimmy Ray. Hannah Elless does nicely as Billy’s love interest, though she does have do a lot of waiting around while he figures things out. Every good show needs its villain, of course, and Michael Mulheron amply fills the bill as Jimmy Ray’s controlling and heartless father.

By some confluence of coincidences, New York theatergoers have been treated to three different bluegrass musicals of late. There was Southern Comfort, which just closed at the Public Theater, and The Robber Bridegroom, still going strong at the Laura Pels Theater.  But Bright Star, despite a few structural flaws, decidedly outshines the rest.

Feel free to share this blog with your friends, and to offer up your own theater stories by posting a comment. I also invite you to check out the new website Show-Score.Com, where you will find capsule reviews of current plays from Yours Truly and many other New York critics.
Posted by Howard Miller at 1:34 PM