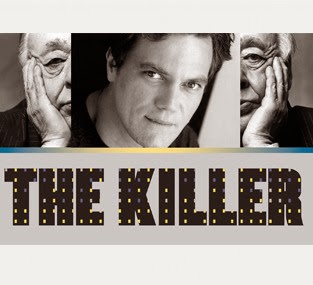 The Theatre for a New Audience ends its inaugural season at the Polonsky Shakespeare Center as it began—with a dream.

Just as Julie Taymor launched the season with a production of A Midsummer Night’s Dream that was filled with dreamlike images, from floating bed sheets to pillow fights, the director of Eugène Ionesco’s 1958 absurdist play The Killer, Darko Tresnjak, sends us on a long day’s journey into a fever-dream nightmare landscape.

The Killer (the fine new translation from the French is by Michael Feingold, the former theater critic for the Village Voice) has not been seen on a New York stage since 1960. It is not the easiest or the most accessible play in Ionesco’s oeuvre, but there is much to admire and appreciate and even enjoy in this well-conceived production, which suggests a trippy sojourn to Purgatory, with glimpses of Heaven, Hell, and Oblivion along its borders.

Heaven is represented in the play’s first act. Berenger (Michael Shannon), who bears the name of the playwright’s favorite Everyman character, has wandered by chance into “the radiant city,” a place where a bureaucratic functionary known as the Architect (Robert Stanton) assures our hero that everything is as perfect as it is technologically possible to arrange. Berenger, who lives in a place “where even the fire in the fireplace is damp,” is enthralled and wants more than anything to move in. But just as he is about to do so, he learns that this Eden has a serpent among its inhabitants, someone who kills three people every single day and who has long eluded detection and capture despite the fact that his (appropriately odd) modus operandi is well known.

In the second act, it is safe to assume we are seeing glimpses of hell, especially since Berenger’s landlady (a delightfully comic Kristine Nielsen) uses the word “hell” over and over again in her speeches. Berenger has fled back to the city, a noisy, dirty, crowded Paris. When he returns to his grubby little apartment, he finds an old acquaintance, Edward, awaiting him. The consumptive Edward (an impressively creepy Paul Sparks) throws around many clues that suggest he may be the very killer that the none-too-keenly-observant Berenger is determined to track down.

Much of Act II is comically crazy, and represents the playwright and the director at their absurdist best, before we enter into the final third of the play where the mood becomes increasingly nightmarish. Berenger finds himself walking on a path that takes him further and further from the city, until he ends up all alone along a dark and anxiety-inducing expanse. It is here that he comes face to face with the killer, who—when Berenger challenges him to explain his motive—merely shrugs his shoulders.

That shrug would make for a good ending for the play. But Ionesco gives Berenger a lengthy (painfully so) speech in which he tries to use logic to convince the killer to cease and desist. After all the tantalizing bits that have come before—including an inexplicable but marvelous depiction of a fascist rally in which Ma Piper (Ms. Nielsen again) promises her followers that she will exchange their old delusions for new delusions—this last static section is pretty much responsible for bringing the play to a crushing halt.

Unfortunately, I’m also not convinced that Mr. Shannon is the best actor to portray Berenger, a character who tells us early on: “I couldn’t go on the way I was living, but I didn’t have the power to die.”  The production’s star comes across as too much of a take-charge kind of guy, whereas Berenger is one of life’s unfortunate victims, someone who reacts rather than acts. I'm thinking that someone like Bill Irwin might be good in the role—but still something would need to be done about that interminably long slide that marks the final section of the play.

My reservations notwithstanding, I found it well worth the visit to see this rarely performed work. The rest of the cast, including all of the ensemble players, are quite good. Mr. Tresnjak's direction is imaginative, as are Suttirat Larlarb's set design and Matthew Richards' eerie lighting work. There are twists and turns to the non-linear plot that can only be understood by viewing the play as a dreamscape, and enough to keep you puzzling for some time over how to interpret the experience.

Posted by Howard Miller at 9:42 PM