'Hamlet' and 'Rosenkrantz & Guildenstern' in Rep: Gutsy Productions by The Seeing Place 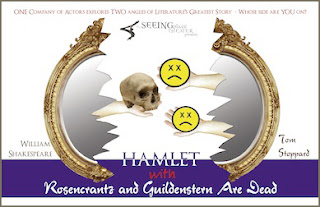 That is the motto of The Seeing Place, one of those amazing up-and-coming shoestring-budget theater companies that manage to pull off compelling and gutsy productions of challenging plays in various pockets of the city.

Now the gang at The Seeing Place have taken on the daunting task of performing, in rotating rep, a pair of theatrical masterworks:  Shakespeare’s Hamlet, and Tom Stoppard’s absurdist take on Hamlet, Rosencrantz & Guildenstern Are Dead.

Same actors taking on the same roles in both plays, with at least some performances of both plays being presented on the same day.  Not unprecedented (Alan Ayckbourn’s The Norman Conquests comes to mind), but still—what a tour-de-stamina for the actors.

I thought of this while sitting in the stifling heat of the Sargent Theater on the fourth floor of the American Theatre of Actors on West 54th Street this past weekend, while watching an undoubtedly sweltering troupe of dedicated performers act their hearts out.  (By now, a promised new air conditioning unit will have been installed, and last week’s heat wave dissipated, so both performers and audiences should be having a better time of it.)

Of the two plays, it is Hamlet that fares better.  And given The Seeing Place’s emphasis on collaborative actor-driven productions, it makes sense that this would be the case.  Hamlet is an actor’s play, with each iconic role open to and able to support a wide range of interpretations.

The production is dominated, as it should be, by the title character, here played with Ethan Hawke-like gusto by The Seeing Place’s founding artistic director Brandon Walker.  Mr. Walker brings out all of Hamlet’s neurotic indecision and pretty much erases the distinction between the character’s feigned madness and actual madness.  He is a charismatic and compelling actor, who brings to fruition the company’s motto (voyeurism, simplified) and draws the audience into his world.

Of the rest of the cast, standouts include the company’s managing director Erin Cronican as an overprotected and vulnerable Ophelia; Jason Wilson and Janice Hall as the self-deluding and, apparently, quite-fond-of-drink King Claudius and Queen Gertrude; and David Arthur Bachrach, who nicely shows off his classical acting chops in the roles of the Ghost, the Player King, and Gravedigger I.

Rosencrantz & Guildenstern Are Dead is a far more difficult play to pull off.  It really does call for a strong directorial hand from someone with a real understanding of the requirements of Theater of the Absurd, which too often falls into the mode of theater of the “absurd” (not the same thing.) When done well, the results can be nothing short of a breathtaking journey into a surrealistic world.  For example, quite possibly the best production of any play I have ever seen was that of Ionesco’s The Chairs, as it was done to utter perfection and with great attention to detail by the Théâtre de Complicité in London about 15 years ago.

But this is not generally the norm with productions of absurdist plays.  At last weekend’s performance of the Stoppard play, The Seeing Place company appeared to still be working through its approach, and there was rather too much of the absurd (as in silliness) and not enough of the Absurd's alternative reality for my taste.  Since the company puts a premium on allowing its actors “the freedom to discover the story with the audience,” it is likely they will find a stronger footing before the run is through.

Meanwhile, if you agree with Shakespeare that “the play’s the thing,” I’d recommend an evening with Hamlet.  (Just check ahead of time to make sure the air conditioning is working!)

Posted by Howard Miller at 5:09 PM