The Burnt Part Boys: Earnestness is Not Nearly Enough 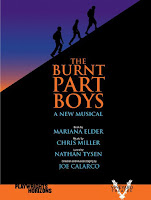 The best thing about The Burnt Part Boys, now in previews at the Playwrights Horizons, is its evocative title. Unfortunately, the musical itself, which has been in development for at least four years, has little to offer by way of script, lyrics, or music—kind of a difficult set of obstacles to overcome.

It’s not that wonderful theater can’t happen with a modicum of plot. Waiting for Godot comes to mind, as does the current production of The Aliens at the Rattlestick Playwrights Theater. But both Samuel Beckett’s classic play and Annie Baker’s contemporary one engage an audience because the characters are intensely engaging, as are the words that come out of their mouths courtesy of the playwrights.

In The Burnt Part Boys, however, playwright Mariana Elder and Lyricist Nathan Tysen have not succeeded. The storyline, while earnest as can be, just doesn’t make for interesting theater. Neither Elder nor Tysen shows a mastery of language to convincingly express the thoughts of the characters, a group of teenagers, one of whom leads the others in a quest to dynamite a coalmine where two of their fathers were killed a decade earlier. [The title refers to the name the locals started calling the mine after the disaster, which occurred in 1952 in West Virginia coal country.]

All of Act I and much of Act II concerns the long journey to the mine site, which is about to be reopened despite a pledge by the owner to keep it permanently shut in memorial to those who died there. So you do have the makings of a quest story or a bildungsroman, in which you might expect great truths to be revealed and friendships to be either cemented or destroyed. Yet little that unfolds in The Burnt Part Boys leaves the realm of the mundane.

I don’t want to beat the show to death, yet there is little to praise. What I can offer goes to the minimalist set by designer Brian Prather, using ropes and ladders to portray the rugged terrain, and the score by Chris Miller that shows some potential in the modernist style of Adam Guettel or Michael John LaChiusa.

As for the performances, let’s just say that even talented thirty-something actors who look and act like thirty-something characters should not be playing 18-year-olds, and characters living in West Virginia coal mining country in 1962 should talk like that’s where and when they are living. In the case of The Burnt Part Boys, I absolve all of the actors and hope they go on to find roles that allow them to display their talent to better advantage.

Feel free to tell your friends about this blog, and to share your own theater stories by posting a comment.
Posted by Howard Miller at 3:41 PM