Two new shows: One warm and inviting, the other smarmy and farcical 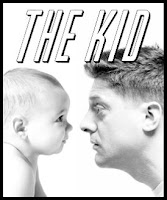 Aficionados of edgy plays about the angst-filled lives of sophisticated, cynical, and smarmy characters should skip down to my review of White’s Lies below. First, I want to talk about a new show that has likeable characters, a situation that is thoroughly engaging, and a script that is both laugh-out-loud funny and moist-eyed touching.

The show is The Kid, a musical about a gay couple hoping to adopt a baby, now playing at the Acorn Theater at Theater Row on 42nd Street.

That the couple in question is gay is, of course, germane, but one of the many strengths of The Kid is that it tells a universal story about two people who have made the commitment to bring a child into their lives, and the challenges they face trying to make it happen.

If it were not so well done, it would be easy to dismiss The Kid as a live version of a made-for-television movie you might see on the Lifetime Channel, or perhaps more likely on Logo, the TV network that shows Lifetime-like gay themed movies. A couple wants a child, works through an adoption agency, goes through some anxious moments, seeks the support of friends and family, and so forth (“and so forth” being my way of saying I am not going to tell you how it ends).

The Kid is based on the book by the same title, written by popular sex advice columnist Dan Savage. Savage has been transformed into the lead character in the musical by writer Michael Zam, supported with songs by Andy Monroe (music) and Jack Lechner (lyrics) that build our understanding of and connection with the characters over the course of the show.

Gotta hand it to director Scott Elliott, someone whose work I have to confess I never particularly admired before now, and to a wonderful cast, starting with Christopher Sieber, he of the beer belly, teddy bear personality, and facial expression of borderline panic as he deals with the everyday crises of life, both the real and the feared. Sieber plays the lead role of Dan, whose protective mantra is: “babies are born dead; birth mothers can change their minds.” The line is, of course, not funny, but it says much about the character of Dan and of the anxiety that undercuts his dream of parenthood.

It would take a real curmudgeon not to grow quite fond of Dan and his partner Terry (Lucas Steele), Dan’s practical and supportive mom (Jill Eikenberry), and Melissa, the homeless teenage birth mother (Jeannine Frumess, in a strong and layered performance). The rest of the cast, many of whom play multiple roles, are also quite good, and the whole of the show has a real ensemble feel to it.

Bottom line: I arrived at the theater tired and cranky after a frustrating day at work. Before long, I found myself caught up in the show as events unfolded onstage, and I left feeling uplifted and warm. Works for me!

OK. Now on to the edgy comedy about the angst-filled lives of sophisticated, cynical, and smarmy characters.

It’s called White’s Lies, and it is the first play by motion picture marketer Ben Andron, who has given us a mixture of sit-com and farce that more-or-less works if you think of it in those terms. Thus, the play offers us TV comedy situations, and characters who speak in snappy one-liners and who perform with the rapid pacing of a light-weight farce, under the direction of Bob Cline.

The storyline: Womanizer Joe White (Tuc Watkins) has made a career of picking up women in bars and telling them all manner of lies as they head out for a night of debauchery. Joe’s mom (Betty Buckley), from whom Joe has been estranged, tells him she has terminal cancer and wants nothing more than for him to present her with a grandchild before she dies. The plot unfolds as Joe tries to spin a web of lies that will restore him to his mother’s good graces. Along the way, he learns a few lessons about life and grows up just a little bit.

The play is abetted by some good comic performances by supporting players Rena Strober, Jimmy Ray Bennett, and, especially, Peter Scolari, who earned his sit-com chops of such television fare as "Bosom Buddies" and "Newhart."

White’s Lies has not been well received by the critics, but in my view Ben Andron shows some skill and reminds me somewhat of Douglas Carter Beane, who has given us a couple of funny offbeat comedies, As Bees in Honey Drown and The Little Dog Laughed. Andron is not yet writing at that level, but I would say that White’s Lies works better than Beane’s most recent outing, Mr. and Mrs. Fitch, and I would like to see what else he is capable of.


Feel free to tell your friends about this blog, and to share your own theater stories by posting a comment.
Posted by Howard Miller at 9:56 AM