MERRILY WE ROLL ALONG: A New Off-Broadway Production of the Musical Everyone Wants to 'Fix' 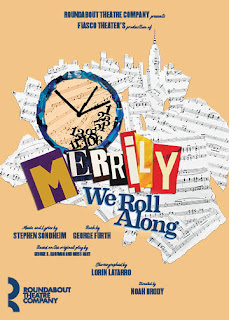 It's not hard to imagine that every one of the multitudes of fans of Merrily We Roll Along, the much-loved Stephen Sondheim/George Furth musical that famously flopped in its inaugural 1981 Broadway run (52 previews and 16 post-opening performances) has wanted nothing more than to resurrect and "fix" it.

It does seem like there is a new production every time you turn around, with each one bringing some tweak to the backwards-through-time story that starts with a tone of cynicism in 1976 and wends its way with its trio of middle-aged friends to 1957. The ending, a heart-melting magical moment of unabashed youthful dreams and endless possibilities, always makes for a socko experience for the audience by stirring up memories of when we all could sing:

It's our time, breathe it in.
Worlds to change, and worlds to win...


But there is a lot of storytelling to sit through before you get to the payoff in this tale of regret over what has been lost in a quest for fame, power, and fortune.

In order for the payoff to actually pay off, you've got to make the case that the things that are discarded are so significant, and the things they are traded for are so worthless, that your audience is willing to follow the backwards trajectory and feel the heartbreak over what has been casually thrust aside in exchange for flash and trinkets.

To give credit where it is earned, the current incarnation of Merrily at the Roundabout's Laura Pels, presented by the inventive company known as Fiasco Theater, does get half the formula right, and does so better than in any other production I've seen.

Where Fiasco succeeds, it does so by boiling down Merrily to its essence, with six performers, eight musicians and a one-act retooling. In doing so, it places the emphasis where it belongs: on Frank (Ben Steinfeld), Charley (Manu Narayan), and, at long last, on Mary (Jessie Austrian), who has always seemed to fade into the background in previous productions.

While Frank and Charley remain familiar figures, the re-examination of Mary's character is quite an eye-opener. In Ms. Austrian's hands, we see someone who has truly gotten lost somewhere along her life's path. Without changing the dialog or the songs, there is plenty here to provide us with some depth of understanding of what has happened to this very talented, if conflicted, novelist. Her backward story is the one to watch, and her presence throughout provides a balance to the entire enterprise, which always before has seemed to be about petulant Charley and self-centered Frank.

Unfortunately, there is the other half of the equation to contend with.

The question we must ask ourselves is, how terrible, really, is it that Frank has given up writing for the musical theater in exchange for a Hollywood lifestyle, with all of its clichés intact?


For starters, we only have Charley's word and one successful musical under their collaborative belts that "no one does the music thing" better than Frank. We only hear two songs that Frank has written, "It Started Out Like A Song" and the novelty number "Bobby and Jackie and Jack." So, what cache of precious gold has been lost in Frank's pursuit of the brass ring?  Why can't he be "rich and happy" in his new life?  Or rich and miserable, for that matter?  Why blame it on "the blob," as his shallow new acquaintances are referred to. Is there no "blob" in the world of musical theater?

What this production does, unintentionally one assumes, is to emphasize Merrily's flaws. Sondheim's score remains wonderful, but Mr. Furth's script, which draws its inspiration from George S. Kaufman and Moss Hart's 1934 play of the same title, simply does not hold up to scrutiny.

The same could be said of most musicals, of course, but this being a Sondheim musical, it will go on being scrutinized and tinkered with for a long time to come.

As for the production itself, I think the best way to describe it would be to quote another Sondheim lyric from another show, one that, coincidentally Fiasco performed at this same theater four years ago -- Into the Woods, in which the character of the Witch sings, "You're not good. You're not bad.  You're just nice."

The "nice" part, besides the sharper look at the character of Mary, consists of a few touches here and there:  the inclusion of a generally deleted scene with the unpleasant parents of Frank's first wife, Beth (Brittany Bradford); a bit of costume cleverness that effectively works to show Mary's de-aging; the marquee of the old Alvin Theatre where Merrily had its original run; the use of slow-motion and backward-spoken dialog.  All of these would provide pleasurable moments for Merrily aficionados, but not, I think, for those not part of the "in-crowd."

My advice is, download the documentary about the making of the original production of Merrily, titled "Best Worst Thing That Ever Could Have Happened."  That touched my heart way more than this stage production.


Feel free to share this blog with your friends, and to offer up your own theater stories by posting a comment. I also invite you to check out the website Show-Score.Com, where you will find capsule reviews of current plays from Yours Truly and many other New York critics.

Posted by Howard Miller at 4:54 PM