2018 TONY AWARDS: Monday Morning Quarterbacking and What You Should Try to See 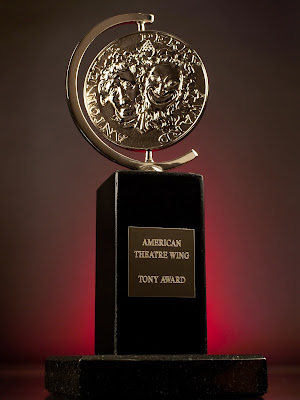 That's how many of my predictions matched the actual winners of the 26 Tony Awards handed out last night at Radio City Music Hall.  That's 54%, if you are interested in such things.

My biggest against-expectations prediction went for the Best Revival of a Musical.  I was happy to champion the nigh-unto-perfect revival of the Lynn Ahrens/Stephen Flaherty musical Once On This Island.


The one-act, 90-minute show was up against some formidable competition with the full-scale productions of Carousel and My Fair Lady. Both had their supporters, and conventional
wisdom was that My Fair Lady would win. So yay for this one!!! In my view, OOTI Director Michael Arden ought to have won as well, but there is no separate directing award for revivals, just a single Tony for direction of a musical, new or revival.


This year, David Cromer, a wonderful director in his own right, was swept up in the evening's wave of awards that went to The Band's Visit, which, coincidentally, is another 90-minute musical. It walked away the big winner, picking up 10 awards:  Best New Musical, Best Director, Best Original Score (by David Yazbek), Best Orchestrations (by Jamshied Sharifi), Best Book (by Itamar Moses) Performance awards for its stars Katrina Lenk and Tony Shalhoub and for Featured Actor Ari'el Stachel, Lighting Design (Tyler Micoleau), and Sound Design (Kai Harada).


Let's give special kudos to orchestrator Sharifi, for whom this was his first theatrical musical project (he has number of film scores to his credit). He has done an especially fine job of orchestrating the music for the performances by the very talented on-stage band of David Yazbek's jazz-infused Middle Eastern-sounding score.

You could not go wrong seeing either of these. If you love theatrical storytelling and that good old stage magic, I'd say go with Once On This Island, a charming, occasionally darkish fairy tale with a Caribbean flavor performed by a great ensemble of actors, dancers, and singers and beautifully staged and directed by Mr. Arden.

The Band's Visit tells a softer and gentler story. Personally, I was more taken by its original Off Broadway production at the Atlantic Theater Company, a smaller, intimate space better suited to the show than a big Broadway stage. But Katrina Lenk's performance remains one of the true highlights of the season. You should know that Tony Shalhoub has left the production and will be replaced shortly by Sasson Gabai, who played the role in the original 2007 film on which the musical is based. I expect he will be fine. It is Ms. Lenk's performance you will want to catch.

Here's a question. Why do so many productions seem uncertain how best to make use of the humongous stage at Radio City Music  Hall, and, more importantly, how best to display their musical numbers for the television cameras? Surely, it is the much larger, potential ticket-buying TV audience they would want to reach out to. Yet year after year, so many of the staged excerpts fall flat or are swallowed up in the vastness of the performance space.

Of the production numbers presented at this year's Tonys, the most exciting was a non-winner. That would be Summer: The Donna Summer Musical.  Smart move to have Donna Summer's daughters introduce the segment, and then have the three actress who play the Disco Queen at various stages of her life (LaChanze, Storm Lever, and Ariana DeBose) break out into a thrilling performance of "Last Dance."

Be warned that as a full-scale Broadway production, Summer lowers the bar to the floor when it comes to the quality of its Wikipedia-lite script, and only LaChanze is able to provide a sense of Donna Summer's power as a singer.  But we're talking here about the performance at the Tonys, which I'd call a showstopper and ticket-seller of the highest order. The show at the Lunt-Fontanne Theatre is pretty much critic proof.  If you are an authentic Donna Summer fan, nothing I can say will keep you away, so go and have fun.

As for the other highlighted musicals, only My Fair Lady offers a clear vision for what could have been a musty revival of a museum piece. Director Bartlett Sher puts Liza Doolittle at front and center, emphasizes her growing independence as a woman, and pretty much does away with the idea that  MFL is simply an old fashioned romantic comedy. If you want a reproduction of Rex Harrison and Julie Andrews (or Audrey Hepburn from the movie), this is not for you. Otherwise, it's certainly well performed and includes all of those "loverly" songs you remember, presented rather better than they were in the mash-up compilation you saw on the Tonys.  As a bonus, there is the ever-glorious Diana Rigg, magnificent in the role of Henry Higgins' mother.

Carousel is, musically, one of the greatest shows ever written. The singing throughout the current revival is excellent, but the overall direction is disappointingly muddy and timid. Lindsay Mendez deservedly won a Tony for her sparkly performance as Carrie Pipperidge, brightening up the stage whenever she appears. The all-male dance number ("Blow High, Blow Low") you saw performed on the Tony show is an excellent example of Justin Peck's Tony-winning choreography. My recommendation here is half-hearted, however. I much prefer the PBS Live From Lincoln Center televised version from 2013, which you may be able to watch online.

Mean Girls and Frozen cater to fans of their respective movies. SpongeBob Squarepants is much more creative, lively, and fun, but it helps a lot to be familiar with the characters before going in. None of their production numbers as shown on the Tonys did them justice.

With respect to the non-musical shows, there is no doubt that the revivals of Three Tall Women and Angels In America are being given magnificent productions and are well worth seeing.  Harry Potter and the Cursed Child makes for a fitting entry to the HP series, although if you are not a fan of the "boy who lived," I don't know why you'd want to see it, especially as it is split into two separate plays (the second is the far stronger, by the way). That's quite a commitment for a disinterested theatergoer, even with its excellent staging and performances. A play that opened post-Tony deadline, The Boys In The Band, is being given a solid production. It is a milestone work that is also well worth seeing.

Finally, some takeaways from the Tony show itself.

This was one of the better shows in recent years. Hosts Josh Groban and Sara Bareilles were ideally suited to the task. 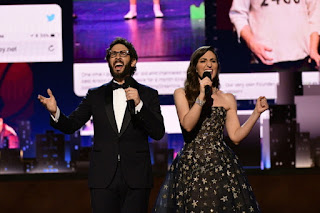 They brought a sense of their own delight as theater geeks. It was so nice to get away from snarky jokes and just to relish the pleasures of Broadway with hosts who seemed to do just that.

Many of the acceptance speeches included heart-felt pleas for compassion and embracing of our differences. Tony Shalhoub spoke of his Lebanese father's arrival at Ellis Island. Ari'el Stachel talked about pretending he was not a Middle Eastern person. Lindsay Mendez told us how she had been encouraged to change her last name to something like Matthew, "or I wouldn't work."

Several spoke out on behalf of LGBT rights. There was Andrew Garfield's "Let's just bake a cake for everyone who wants a cake to be baked," and John Tiffany's leading a community singing of "Happy Birthday" to his boyfriend in the audience. But I was most moved when Nathan Lane choked up when giving a shout-out to his husband. Others have done the same in recent years, but at the age of 62, Lane surely remembers when being openly gay was a risky business, personally and professionally (as it still is, in many instances). So this was a significant public moment of joy and pride during Pride Month.

And there was the awarding of a Tony to drama teacher Melody Herzfeld. The honor was given for her wonderful work as a theater teacher, but we know, as well, that she protected five dozen students at Marjory Stoneman Douglas High School in Parkland, Florida during the mass shooting in February. Even more visible to the live and home audience, and quite a moving tribute to their resilience, was a performance by her students of "Season of Love" from the musical Rent.

It is easy to cynically brush these off as lightweight gestures. But each of these moments represents a bit of hope for a nation that has become increasingly angry and intolerant - on both sides of the political spectrum (need I mention Robert De Niro's self-indulgent bleeped-out remarks?)

All in all, it was quite an evening.

Meanwhile, the new Broadway season has begun.  The Boys In The Band was first, but this summer will also see Broadway productions of Straight White Men, Head Over Heels, Getting the Band Back Together, and Pretty Woman.

One year has ended, and the next begins.  Curtain up!!!

Posted by Howard Miller at 8:59 AM