THE ARTIFICIAL JUNGLE: Mind the Piranhas! 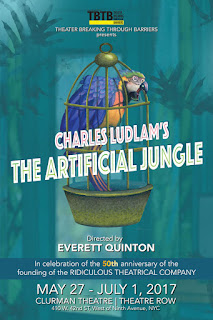 For a fun evening of silly entertainment, you might want to head on out to the Theater Breaking Through Barriers' revival of Charles Ludlam's film noir parody, The Artificial Jungle, at the Clurman Theatre at Theatre Row. Just make sure to keep an eye on the piranhas; they steal the show! 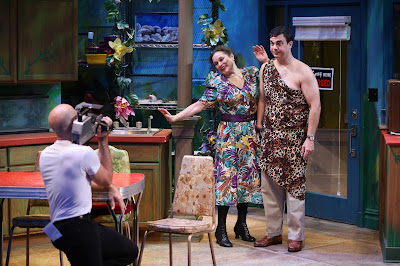 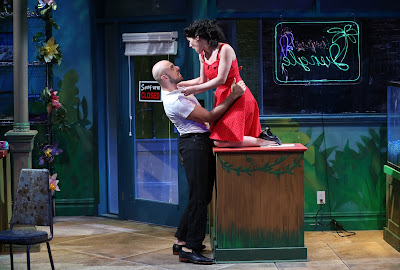 The play takes place in a family-owned pet store in New York's Lower East Side, run by Chester Nurdiger (David Harrell) and his wife Roxanne (Alyssa H. Chase). Chester's mother (Anita Hollander), who fusses constantly over her nerdy son, lives with them in their apartment in the back of the store.

Roxanne is fed up with her dull-as-dishwater life in which feeding and cleaning up after the animals, her chirpy and generally oblivious husband, and her irritating mother-in-law make up her tedious routine. Her opportunity for escape comes when Chester hires hunky Zach (Anthony Michael Lopez) to help out. It isn't long before Roxanne seduces Zach into killing Chester (right after she has taken out a hefty life insurance policy on her husband, of course).

That, in a nutshell, is the plot, clearly borrowed from Billy Wilder's film noir classic Double Indemnity, which starred Barbara Stanwyck as the discontented housewife and Fred MacMurray as the insurance salesman she targets to be her husband's killer. Of course, Double Indemnity was played for its melodramatic noir cynicism, whereas The Artificial Jungle is played for laughs.

For this revival, director Everett Quinton, who played Zach in the original production back in 1986 and later took over as artistic director of Charles Ludlam's Ridiculous Theatrical Company, gives us more smiles and appreciative chuckles than guffaws and belly laughs.

The story focuses on the multiple efforts by Roxanne and her half-hearted co-conspirator to successfully bump off Chester. For one thing, they are always under the suspicious gaze of Mother Nurdiger. They also have to work around the many unannounced visits by the local cop and family friend Frankie (Rob Minutoli). But eventually, they manage to pull it off and then make it appear that Chester got chomped to death when he slipped and fell part way into the store's piranha tank (just the sort of "ridiculous" the production could use more of).

The play also picks up a bit from another source, Émile Zola's novel Thérèse Raquin, which comes into play when Mother Nurdiger suffers a stroke and has to sit in silence, knowing that her daughter-in-law and her lover have killed her beloved Chester. Anita Hollander handles the grimaces and eye movements with just enough spoofy exaggeration to bring the silliness to its peak, especially if you recall Judith Light's Outer Critics Circle Award-winning performance of the mother in similar circumstances in last year's otherwise painfully gothic Broadway adaptation of Thérèse Raquin.

The cast as a whole does well with their roles, but because the plot itself is predictable, there are only a few surprises.  The best of these involve the participation of the marvelous piranhas (Vandy Wood is the puppet designer and Satoshi Haga is the puppet master). Keep your eye on them as they move around in their tank and follow the action with their eyes. They are full of personality, and enrich the production ten-fold. 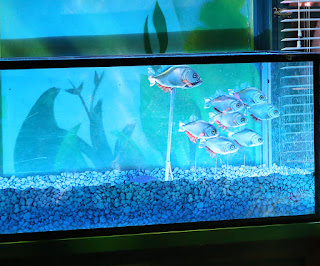 Watching the cavorting carnivorous fish makes me think that The Artificial Jungle might make for a fun and quirky musical, along the lines of Little Shop of Horrors. Now that could well be something to sink your teeth into!