THE PLAY THAT GOES WRONG: More Fun Than a Barrel of You-Know-Whats 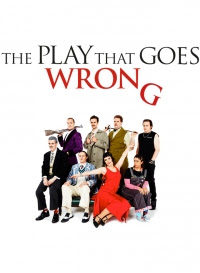 If you are a true fan of exquisitely timed, perfectly performed slapstick comedy - the kind that leaves you rolling in the aisles with laughter -  then let me say this about The Play That Goes Wrong, opening today at the Lyceum Theatre: It is deserving of all of the adjectives listed above.

The show, a presentation of Mischief Theatre and written by three of its members (Henry Lewis, Jonathan Sayer, and Henry Shields), is also clever as all get-out (and by that I mean Tom Stoppard clever; it's that good), without resorting to the kind of visible-seams cleverness that separates slapstick from classic farce, a form I admire but that rarely gets me laughing out loud.

Of course it is a matter of taste, but I've always been a sucker for grand pie-in-the-face physical comedy:  Charlie 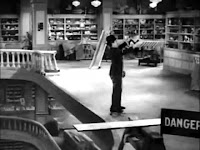 Chaplin roller skating while blindfolded in Modern Times; Laurel and Hardy attempting to move the piano in The Music Box; Harold Lloyd clinging to the clock on the upper stories of a high-rise, dangling over a busy street in Safety Last. 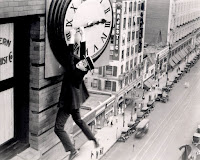 This is inordinately funny stuff.  You know that no one really gets hurt in such scenes, which is what gives you permission to laugh as heartily and openly as you like. And, really, they are acts of sheer genius.

The Play That Goes Wrong, an Olivier Award-winning British import, also manages to surmount the difficulties that often plague transfers of shows that hold mega-hit status in London but somehow lose their way in translation to New York. There is nothing arch about The Play That Goes Wrong, no in-jokes that only a native Brit could appreciate. It's just damn funny.

The conceit of the show is that we are there to watch a third-rate theater troupe putting on a hoary old British mystery: The Murder At Haversham Manor. As the play proceeds, everything -- and I mean every conceivable thing -- goes wrong:  missed cues, injuries to actors, last-minute substitutions, mistakes in line readings, lighting problems, missing props, and the gradual but total collapse of the set.  It is all just awe-inspiring!

The three creators of all of this mayhem appear in the play, with Mr. Shields playing the director of the "mystery" that is falling apart before our (and his) very eyes. At one point, he admonishes us for being distractingly noisy: "This isn't like television. I can see you as well. Bloody Americans!"

Dave Hearn is a standout as an actor who is tickled with glee at every "brilliant" ad lib he manages and at every moment of applause coming from the audience. The real director, Mark Bell, and the rest of the company (Bob Falconer, Greg Tannahill, Charlie Russell, and Nancy Zamit) all deserve the highest praise for this glorious romp!


*Bet you didn't know this one!


Feel free to share this blog with your friends, and to offer up your own theater stories by posting a comment. I also invite you to check out the website Show-Score.Com, where you will find capsule reviews of current plays from Yours Truly and many other New York critics.

Posted by Howard Miller at 8:08 AM

Email ThisBlogThis!Share to TwitterShare to FacebookShare to Pinterest
Labels: Mischief Theatre, The Play That Goes Wrong