ON THE TWENTIETH CENTURY: A Home Run For Roundabout and a Grand Slam for Kristin Chenoweth 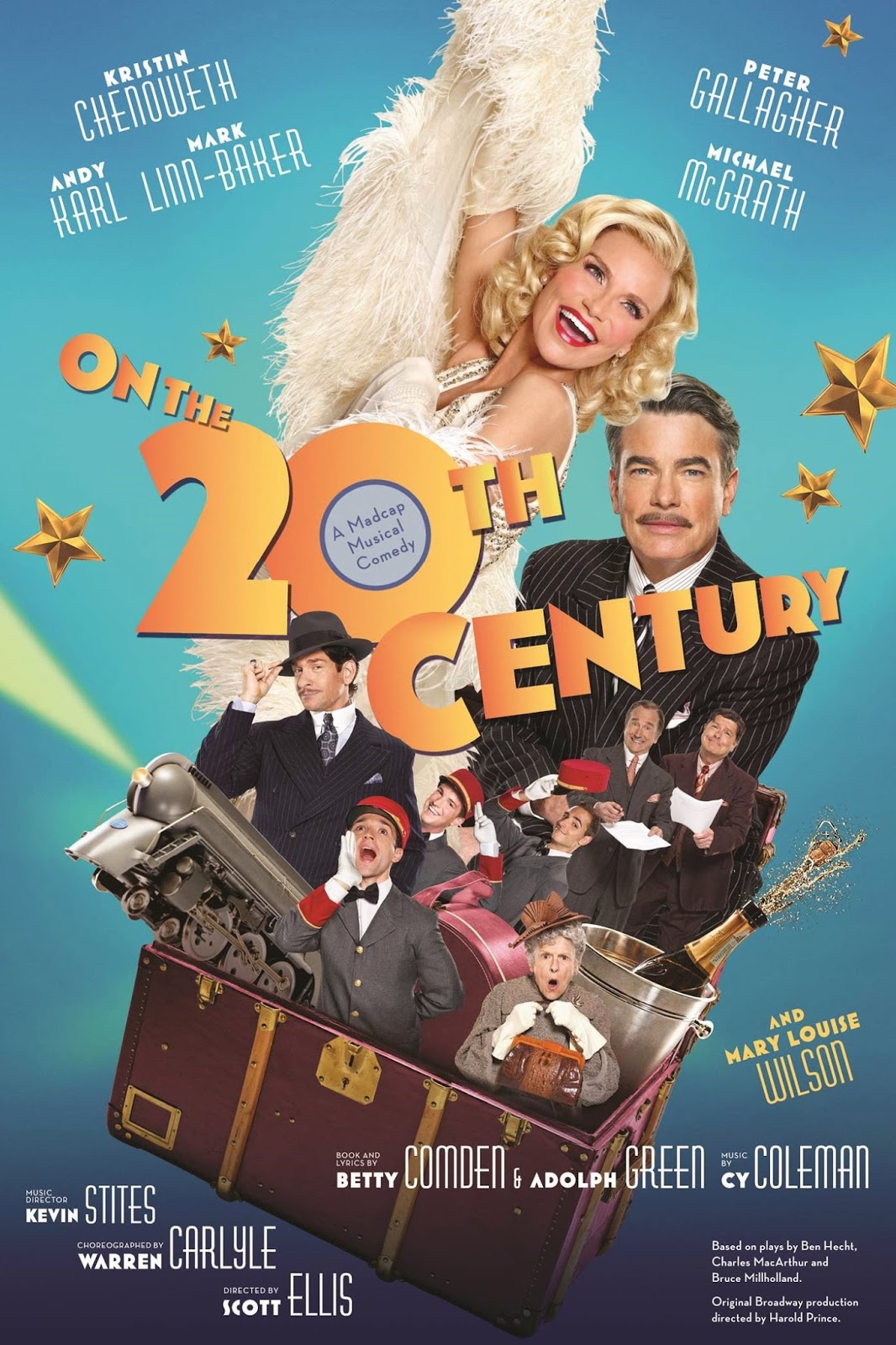 Move over, Helen Mirren, and prepare to be deposed. It’s true you are doing a lovely job portraying Queen Elizabeth over on 45th Street, but look out for upstart Queen Kristin Chenoweth, the glittering star of the Roundabout Theatre Company’s sublime revival of the Comden and Green/Cy Coleman screwball musical comedy On The Twentieth Century at the American Airlines Theatre in the heart of Times Square.

Ms. Chenoweth is riveting in a role that fits her talents as if it had been created for her, though she was but 10 years old and living in her native Oklahoma when On The Twentieth Century opened on Broadway in 1978. Its star, Madeline Kahn, unfortunately withdrew after a couple of months into the run, citing damage to her vocal cords.

Heaven forefend such a fate befalling Chenoweth, an operatically-trained coloratura soprano whose singing is put to grand use with Coleman’s score, one that pays tribute to comic operas and the operetta style associated with the likes of Sigmund Romberg. On The Twentieth Century allows Chenoweth to combine her ability to knock off those High Cs—as she amply demonstrated in her performance in the New York Philharmonic’s concert version of Candide in 2004—with her keen sense of physical comedy, on great display in The Apple Tree, another Roundabout production in which she starred two years later.

So it’s Cunégonde meets Passionella, a combo punch that results, to borrow a quote from Candide, in creating the best of all possible worlds for anyone who longs for that magical blend of star power and production values that makes for a perfect Broadway musical.

Chenoweth plays a 1930s Hollywood superstar at the top of her game, who meets her egomaniacal match in Oscar Jaffee (Peter Gallagher). Jaffee is the theatrical impresario who discovered her when she was barely eking out a living as a rehearsal pianist, a moment we visit in flashback. Goodbye Mildred Plotka; hello Lily Garland.

Together, the pair embarked on a whirlwind of theatrical successes and a torrid love affair, both of which ended when Lily jumped ship and headed out to Tinseltown. Now Jaffee is down on his luck.  With four flops in a row and facing a mountain of debts, he is fleeing aboard the train known as the Twentieth Century Limited. Much can happen in the 16 hours it takes to get from Chicago to New York, and Jaffee intends to make things happen. It seems he has arranged to be ensconced in the stateroom next to the one in which Lily Garland is staying. His troubles will be over if only he can get her to sign a contract with him.

This is the basic set-up that encompasses Act I. Not only do we get to know Oscar and Lily, we meet the show’s significant supporting players as well. There are Oliver (Mark Linn-Baker) and Owen (Michael McGrath), Oscar’s loyal managerial team; Bruce (Andy Karl), Lily’s hunka-hunka plaything, whose slim movie career is dependent on his good looks and on keeping Lily interested in him; Letitia Peabody Primrose (Mary Louise Wilson), an eccentric and evangelical woman of wealth who offers to back Oscar’s next production, an epic about Mary Magdalene in which he hopes to star Lily; and a show-stopping quartet of tap dancing porters (Rick Faugno, Richard Riaz Yoder, Phillip Attmore, and Drew King) who undoubtedly will have their own fan base as the run continues.

All of the elements come together in the grand meteor shower that is Act II. No plot spoilers here, but kudos to the book’s writers, Betty Comden and Adolph Green, who found a way to bring every wild tangent back to the central story of Oscar and Lily. The writing partners adapted the musical from the 1934 Howard Hawk film (titled Twentieth Century), which starred John Barrymore and Carole Lombard as Oscar and Lily. But even before that, there was a play of the same title by Charles MacArthur and Ben Hecht. As it happens, Hecht also penned some of the Marx Brothers movies; that is the kind of madcap mentality we can see at work here.

Although this is not a show that is filled with hummable hit tunes, Cy Coleman has given us multiple musical highlights, where the songs themselves join in glorious harmony with the performances and with director Scott Ellis’s inspired staging. A couple of highlights from Act I are the catchy title song, the splashy “Veronique,” performed by Lily in her very first musical as Oscar’s protégée, and “Repent,” sung by Ms. Wilson’s character with a twinkle in her eye as she relishes a sinful past that predated her current religious fervor.

In Act II, almost every song is a winner—from the dancing porters’ opener “Life Is Like A Train,” to an ode to Letitia Primrose'’s money (“Five Zeros”), to a number about trying to get Lily to sign a contract (“Sign Lily Sign”). There is also a hilarious chase through the train (“She’s A Nut”), a grand production number that has Lily debating with herself over what kind of role she should take in order to further her career (“Babette”), and the final duet between the crazed couple when Oscar is pretending to be on his death bed (“Lily/Oscar”).

And while Kristin Chenoweth is the undisputed top banana, everyone else more than rises to the occasion. Peter Gallagher, who suffered from a voice-damaging infection through much of the preview period, is in fine fettle, giving a John Barrymore-worthy performance as Oscar. Andy Karl shows great comic chops as Lily’s boy toy, and Mary Louise Wilson is splendid as the kooky Letitia Primrose. The production is blessed as well with David Rockwell’s art deco set design and William Ivey Long’s period costumes. The only quibble: the orchestra is rather scaled back for such a full-throttled production.

Somewhere in Broadway Heaven, Betty Comden and Adolph Green are grinning from ear to ear, with two of their shows delighting audiences in theaters residing on the same block of 42nd Street – On The Town at the Lyric and On The Twentieth Century at the American Airlines. There could not be a happier coming together of great American Broadway musicals at their best.

Posted by Howard Miller at 7:15 PM