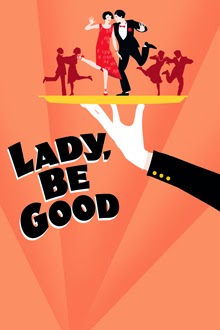 The wonder that is Encores! tonight opens its 22nd season at City Center by doing what it does best, offering up a glorious five-performance revival of the rarely seen Lady, Be Good, the George and Ira Gershwin musical that last appeared on Broadway in 1924, where it ran for 330 performances and starred a pair of hoofers who went by the name of Fred and Adele Astaire.

The production is about as bouncy and bubbly as any you are likely to see these days, even with its paper-thin plot (original book by Guy Bolton and Fred Thompson) that is frequently interrupted by unrelated specialty acts—a vaudeville holdover that even in its time was starting to disappear in favor of stronger storylines (Showboat was only two years away). But when the plot steps aside for a couple of production numbers performed by the likes of the legendary Tommy Tune, who could possibly complain?

What there is of a plot tells the story of a brother and sister, Dick and Susie Trevor, who find themselves out on the street merely because they haven’t paid the rent for 18 months. Dick (Danny Gardner) decides he will get them out of their predicament by marrying a wealthy heiress (Jennifer Laura Thompson) who has eyes for him, despite the fact that he is in love with the equally penniless Shirley (Erin Mackey).

For her part, Susie (Patti Murin) falls into a scheme by which she will pretend to be the Mexican widow of the presumed-to-be dead Jack Robinson (Colin Donnell) so that she can get the inheritance. There is a lot of running around and silliness, and the requisite happy ending, of course. But, really, all of it is in the service of one of Encores’ best choreographed evenings (thanks to Randy Skinner and a very talented ensemble) and a whole trunkful of Gershwin numbers, starting with the show’s two bonafide and enduring hits, the title song and "Fascinating Rhythm."

Given that the show was written around the talents of the Astaire siblings, you can bet there are plenty of opportunities for Mr. Gardner and Ms. Murin to show their stuff.  Performing together, with other partners, or by themselves, both are outstanding dancers, and Gardner—dressed in white tie and tails—does a show-stopping tap number at the top of Act II. Truly, if anyone does a musical about Fred and Adele, these two should be high on their list to take on the roles.

Also stopping the show is Tommy Tune, that six-foot-six bundle of dynamite, who, at 75, still can tap with the best of them. In Act I, he comes out all dressed in scarlet to perform “Fascinating Rhythm,” and in Act II, there he is again all in blue, with “Little Jazz Bird.” What a crowd-pleasing charmer he is!

The production is replete with top-notch performances, including Kristen Wyatt and Jeff Hiller as a wacky couple, and Douglas Sills as the underhanded attorney ("I'm not a quack," he bridles. "I'm a shyster!") who masterminds Susie’s impersonation of “Senorita Juanita.”

Encores! rightfully prides itself on getting the music right. In this case, diligent digging uncovered only a handful of songs for which there were extant orchestrations (by the likes of Max Steiner and Robert Russell Bennett). Rob Fisher,  Encores’ founding music director, used these to guide the creation of new orchestrations. He also serves as guest conductor of the excellent orchestra, which spotlights a pair of exceptionally talented pianists, Chris Fenwick and Greg Anthony, performing "Fascinating Rhythm" and "Lady, Be Good" as in-the-spotlight specialty numbers.

Thumbs up and three cheers to director Mark Brokaw and to all involved in putting together this joyous production. This Lady is more than just good; she is terrific!

Feel free to share this blog with your friends, and to share your own theater stories by posting a comment.
Posted by Howard Miller at 6:47 PM