'Sticks And Bones': A Masterful and Disturbing Revival of A Major American Play 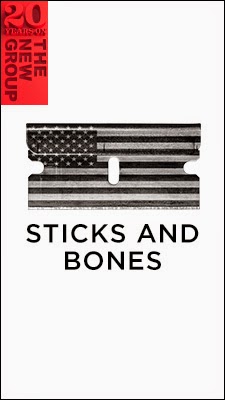 A thrum of unrelenting dread creeps in like an ineffable fog in the excellent, unsettling revival of David Rabe’s Vietnam War era play Sticks and Bones, now on view at the Pershing Square Signature Center in a production by The New Group, deftly directed by Scott Elliott and boasting powerful performances by a cast headed up by Bill Pullman as a man whose very sense of himself is pushed to the breaking point.

Dread is a difficult mood to create and sustain in the theater. Examples abound of productions that are meant to grip an audience with a sense of anxiety and foreboding, yet which have been unable to pull it off. The current Broadway revival of Edward Albee’s A Delicate Balance is one that comes to mind, but there are others such as recent revivals of Sarah Kane’s Blasted, and of another of David Rabe’s works, Streamers.

All should make us feel a growing apprehension as the characters experience it, but each misses the mark in its own way.  The production of Albee’s Pulitzer Prize winning play suffers from an overabundance of “tell” without nearly enough “show,” although previous versions have found a way to unleash the fear that enters unexpectedly into the home of the wealthy middle-aged couple at its center. Likewise, the Off Broadway production of Blasted, with its graphic depictions of emotional and physical abuse, rape, and torture during a time of war, offered all of the shock but fell short in the dread department. And the Off Broadway production of Streamers (the original incarnation was a heart-stopper of disquietude) just fell flat altogether.

Sticks and Bones, however, works on every level, and sadly its 43-year-old no-holds-barred object lessons about imbedded xenophobia, the throwaway lives of soldiers, and the impact of their post traumatic stress disorder on the families of these soldiers provide a cautionary tale for the here-and-now as we carry on a protracted war against terrorism in the Middle East and elsewhere. Substitute an Arab woman for the ghostly Vietnamese character of Zung (Nadia Gan) and you’ve got a play for our age.

Welcome to the world of Ozzie (Mr. Pullman) and Harriet (Holly Hunter), and their sons David (Ben Schnetzer) and Rick (Raviv Ullman). Certainly it is no coincidence that Rabe named his characters for those of the popular warm-and-fuzzy family sitcom (The Adventures of Ozzie and Harriet ran on television from 1952 to 1966, many years longer than the original run of its more famous contemporary, I Love Lucy).

Rabe’s Ozzie and Harriet do seem at first to be spoofs of their namesakes—innocent, insulated, and caught up in the day-to-day comings and goings of their sons. It is easy enough to fall into a trap of viewing them as objects of easy ridicule.

Of all of the characters, Rick maintains the façade throughout most of the play (making a late change-about all the more disconcerting). The parents, however, start to disintegrate from the moment that David is brought home from the war by a no-nonsense sergeant major (Morocco Omari), tasked with distributing the “one-legged and no-legged” veterans to their various households from coast to coast.

Both of David’s legs are intact, but he is physically blind and psychologically damaged beyond his folks’ ability to absorb him back into the fold. Mom can only think to offer up a glass of warm milk to ease his troubles and to invite Father Donald (played with a mix of noblesse oblige and self-certitude by Richard Chamberlain) to perform some churchly magic, which, when it fails to make a dent, sends the priest fleeing for the hills. Dad, on the other hand, has nothing to offer but his own sense of despair; his crumbling identity as a prototypical 1950s pater familias provides nothing for him to stand on, and he feels emotionally and physically threatened by the very presence of the stranger who was his son.

As an audience, we are more likely to identify with Ozzie and Harriet than with David, whose mind is back in Vietnam, riddled with guilt, haunted by the Vietnamese woman he left behind, scornful of his parents’ naivité and casual racism,  and truly dangerous to himself and to those around him. The tension mounts and mounts and never really lets up through the play’s brutal climax.

Altogether, this is a masterful production of a major American play. There is no question that it is discomfiting to sit though, but the power it conveys about its subject matter has an immediacy that demands to be heard.

Posted by Howard Miller at 1:34 PM