Disgraced: A Case of ‘What If…’ That Transcends Its Premise 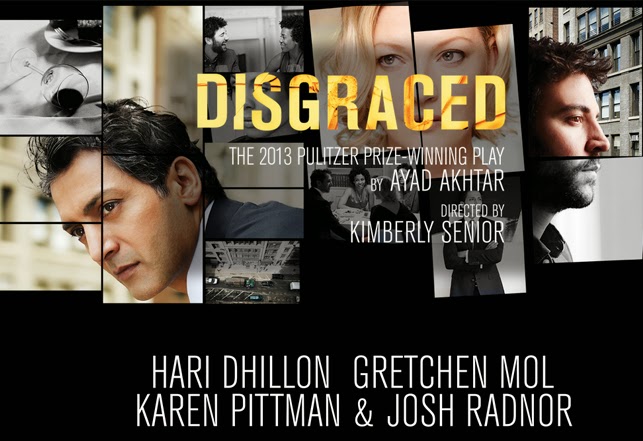 What if we were to set up a playwriting competition – a contrived situation that brings together four disparate characters, and then let ‘er rip!

Let’s see…  Make one of them a Muslim man, one of them a Jewish man, the third a white woman, and the fourth an African American woman. Make them all intelligent and financially comfy (two lawyers, two in the art world). Plunk them down in a picture perfect Upper East Side apartment.  Stir and let ferment.

If you are lucky enough to have Ayad Akhtar take you up on your proposition, and once he pushes past the manipulative set-up, you will discover you have one terrific play on your hands, something called Disgraced. It comes loaded with razor sharp dialog, solid acting, excellent directing, and a great set.  Broadway here we come!  Pulitzer Prize here we come!!!

Actually, the Pulitzer Prize came last year, and Broadway is here right now, with tonight’s opening at the Lyceum Theatre after the play's previously successful Off Broadway mounting last season.

Disgraced unfolds on a world that is a decade past 9/11 and well into the age of the seemingly endless war on terrorism, jihadist extremism, and generalized Islamophobia.

Amir Kapoor (Hari Dhillon) is a successful attorney, expecting to be named partner in his law firm. A Pakistani Muslim who has found it convenient to be perceived as Indian, he considers himself to be fully assimilated. He has little patience for those who give Islam a bad name by attempting to impose a way of life he says reflects beliefs and values and living conditions from 1,500 years ago.

Amir is married to Emily (Gretchen Mol), a white woman and an artist who is about to have a breakthrough exhibit of her work that was inspired by Islamic artistic traditions. Curating the art show is Isaac (Josh Radnor), the Jewish boyfriend of Jory (Karen Pittman), an African American woman, also an attorney and a colleague in the same law firm where Amir works.

The four come together for a celebratory dinner at Amir and Emily’s lovely apartment (elegantly designed by John Lee Beatty), where friendly conversation quickly segues to friendly debate, and then to not-so-friendly arguing that threatens to turn into open warfare. Suffice it to say, and without giving away the specifics, many lines are crossed during and after the dinner party, and it remains very uncertain as to what the future will hold for any of them.

Every good fight needs a spark or two to ignite it, and the playwright has obliged with three instigating elements. The first comes in the form of Amir’s nephew Abe (Danny Ashok), “Abe” being another identity-concealing name chosen to ease assimilation. Abe (or, as his uncle calls him, Hussein) wants Amir to come out in support of a local imam who has been charged with abetting terrorism. Another spark is lit by the suspiciously non-professional relationship between Isaac and Emily. And a third has to do with Amir’s situation at work, which also involves Jory. Knots within knots within knots.

There is so much manipulation of the situations (did I mention that Emily is serving pork for dinner?) that you would not expect this play to work. Yet somehow it does. Ayad Akhtar is able to humanize the characters so that the dialog feels honest and true, and Kimberly Senior’s fast-paced direction (the play runs 90 minutes without an intermission) and solid performances by the tight-knit cast make for an intensely thrilling theatrical experience.

Posted by Howard Miller at 2:04 PM