‘Big Fish’: Check Your Cynicism At The Door 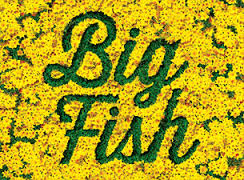 Emotions soar in Big Fish, a powerhouse of a musical (book by John August, music and lyrics by Andrew Lippa) about love and reconciliation, heroes and myths, and the measure of a man’s life that got off to a splendid start at its first preview last night.

It began with an onstage appearance by director/choreographer Susan Stroman, who greeted the enthusiastic and packed house by announcing that the show had just come off a tech rehearsal, and that  this would actually be the first time the cast would be performing the entire show all the way through at the Neil Simon Theatre.

Ms. Stroman’s remarks were met with wild applause, but they did give me pause.  Was this a warning that Big Fish was not quite ready for prime time (even though the show did have a pre-Broadway run in Chicago in the spring)?

I needn’t have worried.  From the opening notes performed by a most able orchestra (under the direction of Mary-Mitchell Campbell) to the very end, we were in good hands indeed.  Noticeable glitches were minor, and—while I would recommend a couple of snips here and there—I’d say that Big Fish is poised to be a big hit.

This is not to suggest that it will suit the tastes of every consumer of musical theater.  Dealing as it does with mortality, the deep abiding love between husband and wife, and a difficult relationship between father and son, Big Fish makes for a most verklempt evening.  This is a show for romantics; cynics need not apply.

In addition, there is no straight-through plot, but rather an accumulation of experiences that only come to a fully realized whole at the end.  And best beware, if you have never been able to succumb to the many charms of Norbert Leo Butz, you should stay away—because he is onstage and performing for a large portion of the time.

As it happens, I am quite content to lose myself in an emotional story, especially one that has the courage of its convictions to present itself without a trace of nudge nudge wink wink.  And I do count myself as a Norbert Leo Butz fan.  I have seldom seen anyone so at home, so comfortable and confident, and so willing to give of himself onstage.

Big Fish, as you probably know, is based on the novel and the movie of the same title. John August, who wrote the book for the musical, was also responsible for the screenplay for the film, in which the central role of Edward Bloom was split between Albert Finney and Ewan McGregor, representing the older and younger versions of the character. Here Mr. Butz carries it all, which does allow us to follow him back and forth in time without any confusion.

If you are unfamiliar with the plot, Butz plays a traveling salesman from a small rural Southern town.  His young son Will (Zachary Unger, with Anthony Pierini taking over on Wednesday and Saturday matinees), who becomes his grown-up son (the talented Bobby Steggert), understandably resents his father’s frequent absences while growing up. To add to their difficult relationship, Dad is a man of effusive imagination, who constantly weaves tales of witches and giants and mermaids in order to explain life’s mysteries, while Will is a down-to-earth pragmatist.  They simply clash on everything.

Even though it is the struggle for understanding between father and son that lies at the core of this story, Big Fish is blessed with the lustrous presence of Kate Baldwin as Sandra Bloom, Edward’s wife, who loves both her husband and her son and longs for their reconciliation.  She, too, gets considerable onstage time, and sings one of the show’s heart-melting numbers, “I Don’t Need A Roof.”

Anyone whose heart is not made of stone will be deeply moved by this and the other soaring melodies that Andrew Lippa has composed for Big Fish.  The Act I closing number, “Daffodils,” is a romantic masterwork, and it follows on the heels of another, called “Time Stops” (beautifully staged), in which Edward first encounters Sandra. Bobby Steggert, who has a lovely tenor voice, gets his time in the spotlight as well, with a song about his father, “Stranger” being but one more example.  Also very compelling are the songs Edward sings to his son, “Be the Hero” and “Fight the Dragons.”

Mr. Lippa, who did not exactly make the world sit up and take notice with his score for The Addams Family, has come through with one beautiful melody after the other.  It could be there are too many of them, but there is not one of these that I would cut.  The orchestrations by Larry Hochman (loved the use of guitars, banjo, and flute) are also first-rate.

If I were to cut anything, it would be the fantasy number that opens Act II, along with some other short fantasy snippets that tend to merely distract.  Big Fish shows enough of Edward’s imagination through the circus episodes (a terrific Brad Oscar is the ringmaster), appearances by Karl the giant (Ryan Andes, excellent as well), and the hallucinatory fantasy number “Showdown” that literally pops out of the television set.   Indeed, the only song I felt did not work well was “I Know What You Want,” sung by the character of the witch in Act I.  Even though the scene is well staged by Ms. Stroman, the song itself does not, in my view, adequately capture the significance of the moment.

All told, however, Big Fish is a wonderful original work for the Broadway stage, with a compelling and complex story that Susan Stroman and company have shaped so very well.  It will be hard to top during this theater year.  By all means, if you are susceptible to romantic, fanciful, and heartfelt tales, you won’t want to miss it!

Posted by Howard Miller at 8:10 PM