'The Importance of Being Ernest Hemingway': Intriguing Mash-Up of Disparate Writers 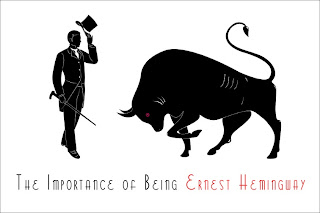 Viewing The Importance of Being Ernest Hemingway, a production of M-34 Theatre now on tap through September 1 at the Access (380 Broadway), is a bit like attending an exhibit of abstract expressionism at the Museum of Modern Art.

There is much to contemplate, to take pleasure in, to admire, to be moved by, and, yes, to puzzle over in what is less a straightforward play than a theatrical expression of both ideas and emotions, inspired by the unlikely pairing of the works of Oscar Wilde and Ernest Hemingway.

In a recent interview, James Rutherford, M-34’s artistic director and co-adaptor (with dramaturg Elliot B. Quick), said that The Importance of Being Ernest Hemingway first saw the light of day five years ago as the culmination of a “series of drunken and impassioned meetings” regarding the juxtapositioning of the Wilde and Hemingway materials.  The company's website also refers to the play as a “trivial comedy,” a description that Wilde appended to the play that serves as framework for this one—The Importance of Being Earnest.

While it is easy to imagine the former (the title alone suggests a possible off-the-cuff joke as a takeoff point), there is little that is trivial in the result, which examines issues of the superficial masks we use in our daily human intercourse and the depths of feeling and vulnerability these cover up.

As an abstraction, The Importance of Being Ernest Hemingway is most like a collage. Wilde and Hemingway have provided the words, with sources that include—in addition to Wilde’s famous comedy—his play Salome, his epistle De Profundus written from prison to his lover Lord Alfred Douglas, and his poem The Ballad of Reading Gaol.  Hemingway’s contributions include excerpts from his novels The Sun Also Rises and A Farewell to Arms, and from his non-fiction work on bullfighting, Death in the Afternoon.

But like any good collage, if you look at it closely you will see (or project) many more influences.  These are the ones I jotted on my program while watching the play:  the Marx Brothers, the experimental playwright Jean-Claude van Itallie, Sam Shepard, Lewis Carroll, Tennessee Williams (his late works), the staging of the recent production of Murder Ballad, and the over-the-top directing style that Jesse Berger employed in the first couple of seasons of productions by the Red Bull Theater, with homoeroticism and interposed musical numbers as subtexts.

That should give you something to think about.

While there is no straight-through plot, let me try to impose one.  Imagine that American expats living in Paris in 1926 are putting on a production of The Importance of Being Earnest. The Americans are painted something along the lines of the character of Harry Selfridge, as played by Jeremy Piven in the PBS period drama Mr. Selfridge:  loud, crude, pushy, sexually bold, and somewhat crazed—rather different from the genteel if eccentric folks in Mr. Wilde’s play.  Wilde’s famous witticisms remain but take on decidedly new shades of meaning with the insertion of Hemingway’s language.

This is an intensely physical production that includes (thanks to fight choreographer Alexander Salamat) credible episodes of boxing, wrestling, general horseplay, slapping, and the occasional piece of overturned furniture, as the two central characters, Algernon and Jack, work through notions of masculinity, the expectations of social norms, and the immediate impact and subsequent implications of an outburst of alcohol-fuelled honesty and raw emotion.

To add even more to the stew, there are other wildly choreographed moments, original music by Alex Clifford, and a rendition of “It Had To Be You,” in four-part harmony no less.

For such an abstract work, the acting, which requires intense attention to detail and to shifts in tone, is outstanding.  I will single out for special praise Ross Cowan as Algernon and Tim Hassler as Jack, who carry a great deal of the heavy lifting on their shoulders, but truly everyone is up to the task. The women, who generally are required to stick more closely to the Wilde script, are also excellent, with Charlotte Graham as Cecily most attuned to her character’s romantic flakiness and charm.

The Importance of Being Ernest Hemingway is clearly a labor of love for all concerned.  M-34 and its artistic director, Mr. Rutherford, have come back to it more than once over the years.  And while, in my view, it could do with a bit of trimming and further shaping, it is an intriguing production that is most worthy of their tough and tender ministrations.

Posted by Howard Miller at 8:40 PM