'Volleygirls': A Winning Entry in the Madhouse Known as NYMF 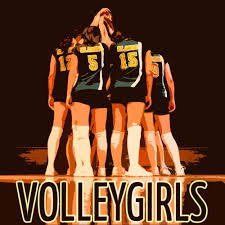 I’m happy to report that, though the title might suggest otherwise, the high-spirited musical Volleygirls offers up not one single ditzy blonde.

Volleygirls is being presented as part of the whirlwind known as the New York Musical Theatre Festival.  NYMF, as it is generally referred to, is always a mixed bag, with dozens of full productions, readings, and other events presented at various times of the day in multiple venues over the course of three weeks.  With only brief descriptions and word-of-mouth to fuel decision-making, you pays your money (single tickets for full productions are $25 a pop) and you takes your chances.

So let me be the word-of-mouth for Volleygirls, and let you know that this is one winning musical—professional, polished, and well-performed by a strong cast of mostly Equity actors, headed up by Susan Blackwell of [title of show], which famously had its start in NYMF and went on to successful Off Broadway and Broadway runs.

Will Volleygirls follow that same path to Broadway?  Let me say that it definitely could, thanks to a tuneful score (music by Eli Bolin, lyrics by Sam Forman) and a funny, upbeat, and heart-felt  book by Rob Ackerman that mixes the efforts of a woefully performing Catholic girls’ high school volleyball team with the trials and tribulations of adolescent angst.

Yes, yes, this is definitely a variation on a theme that has been aired many times before.  Fame, Sister Act, and Glee quickly come to mind.  But there is an important difference in that Volleygirls focuses on the lives of girls, and in a way that refreshingly is not about being boy-crazed or striving to fit in with the in-crowd.  The girls in this show deal with real adolescent crises of family problems and figuring out who they are and what they can become.  And for once, the guys are definitely the supporting players (and rather hapless ones, at that).

Susan Blackwell plays Kim, the English teacher-turned-coach, enlisted to salvage the volleyball team from its unbroken losing streak.  Kim reluctantly takes on the job, even though it is revealed that she herself had been a college volleyball star and an Olympian. It seems that Kim, a perfectionist, choked at the worst possible moment and gained long-lived notoriety in the volleyball world.  Still, she knows it is time to get over it, and in a clever number, she has a long chat with a volleyball she calls “Wilson” (a nod, of course, to the Tom Hanks film Cast Away).

Even though Kim’s redemption is key to the plot, most of the focus is on the girls on the volleyball team as they struggle to become the winners they scarcely imagine they can be.

The real strength of Volleygirls lies in its musical numbers. During the course of the musical there are at least four songs that soar, two of which fit in with the theme of girl-empowerment. One of these is the upbeat “I Like Girls,” sung by Marisol (the excellent Gerianne Pérez), who recognizes that her sexual orientation leads her to other girls and is perfectly comfortable with that self-knowledge. The other, also led by Marisol, is called “Jabali,” Spanish for “wild boar,” and serves to describe the attitude of tough confidence the team must exude to become champion players.

A third strong entry is “I’m In Hell,” in which Katie (Juliane Godfrey) lashes out against her friends, her teacher, and her father (Benjamin Howes), the school’s principal.  The fourth (“Animal In Our Midst”) is a roof-raiser sung by Flo (Jennifer C. Johnson), the angry and vengeful parent of one of the girls who was their coach before Kim took over.

When was the last time you saw a pop-scored musical where so many numbers stood out?  And while I'm at it, let me give a shout-out to the terrific band:  Mike Pettry, Eric Davis, Brendan O'Grady, and Alex Wyatt, who really tear into that score.

In addition to the girls on the volleyball team (the others are played by Julia Knitel, Allison Strong, Allison Jill Posner, and Dana Steingold), the cast boasts solid performances by Mr. Howes, whose character is struggling to raise a teenage girl on his own; Charles Karel as the referee; and PJ Adzima as Xavier Ives, the lovestruck game commentator (“Evening, webcast viewers!”), a role Mr. Adzima embraces with sweet and crazy dorkiness.

Volleygirls, directed by Neil Patrick Stewart and choreographed by Ryan Kasprzak, is being performed at various times through July 27 at the Romulus Linney Courtyard Theatre at the Pershing Square Signature Center. There are a number of performances remaining before the festival closes at the end of this month.  For schedule, information, and tickets go to www.nymf.org

Posted by Howard Miller at 9:50 PM