A Sublime Production of 'The Most Happy Fella' 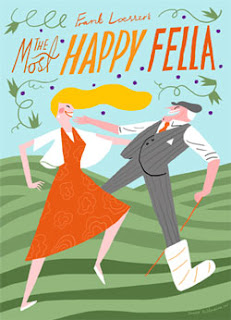 Imagine going into the attic and finding a box of old photos you haven’t looked at in many years.  You open it, and even though everything inside is familiar, this time you see them through different eyes and recognize them for the treasures they always were.

That’s how it felt for me the other day as I sat, watched, and fell in love with the Dicapo Opera Theatre’s exquisite production of Frank Loesser’s The Most Happy Fella.

I was only nine years old when The Most Happy Fella opened on Broadway in 1956, the same year, by the way, as My Fair Lady, Bells Are Ringing, Candide, and Li'l Abner.    Some time would pass before I would see any of these on stage, but the music from the original cast albums quickly became part of the background sounds that surrounded me from the radio, the television, and the phonograph in the living room.

For a pre-teen, even one who enjoyed listening to show tunes, The Most Happy Fella boiled down to a couple of catchy songs:  “Big D” and “Standing On The Corner.”  And over the years, I came to think of Frank Loesser essentially as the composer of two popular hit shows—Guys and Dolls and How To Succeed In Business Without Really Trying.

Then, last year, I was fortunate enough to see the Encores! production of Where’s Charley?, Loesser’s first full-length musical, and found it to be an absolute treat from start to end.  This was followed by the recent revival of How To Succeed In Business Without Really Trying.

And now we have The Most Happy Fella, performed by a talented and blessedly unamplified cast (helmed by the glorious baritone Michael Corvino in the title role), backed by a 33-piece orchestra, and presented in a cozy, comfortable, attractive 200-seat theater in the basement of St. Jean Baptiste Church rather north and east of Broadway.

Let me tell you, tears welled up in my eyes through much of the performance—not due to the story The Most Happy Fella relates (though a sweet and touching story it is), but in response to wave after wave of the beautiful music that Loesser composed for this masterwork—not just Broadway rousers, but solos, duets, trios, quartets, and choral work (“Song of a Summer Night” is every bit as moving as Stephen Sondheim’s “Sunday” or Leonard Bernstein’s “Make Our Garden Grow.”) There’s not a dud in the bunch.

So, is The Most Happy Fella a musical or is it an opera?   No one has ever given a definitive answer to that question, and there is no way I am going to try to resolve it.  Let’s just say that there are elements of both, with straight-out show tunes and music that would fit in just fine in an “official” opera by Puccini, including the delightful Italian language numbers such as “Abbondanza,” performed by a winning trio of chefs, Paolo Buffagni, Brian Carter, and Neil Darling.

Of course, it’s not easy to find singers who can deliver both styles.  What director Michael Capasso has done is to make sure that each cast member is allowed to play to her or his strengths.

The principal roles of Tony, Rosabella, Joe, and Marie are given over to strong operatic performers:  Mr. Corvino (magnificent as Tony); Molly Mustonen as his “mail order bride,” whom he dubs Rosabella; Peter Kendall Clark as the foreman Joe whom Rosabella significantly mistakes for Tony; and Lisa Chavez, in the thankless role of Marie, Tony’s sister and the thwarter of all things good.

The director also has found two terrific musical comedy personalities in Lauren Hoffmeier (somewhat reminiscent, I thought, of Patti LuPone in style and mannerisms) as Rosabella’s waitress friend Cleo (“Ooh!  My Feet”), and Brance Cornelius, a real charmer as Cleo’s happy-go-lucky beau Herman (“I Like Everybody”). Their numbers together, especially “Big D,” are crowd pleasing showstoppers.

The on-stage orchestra, under the baton of Pacien Mazzagatti, does a fine job of backing the singers without ever drowning out the voices, and the choreography by Francine Harman and set design by John Farrell are just right for the relatively small performance space.

If you are at all interested in seeing this production, you’ve got to shake a leg, as it closes on July 8.

Meanwhile, mark your calendars for next May 16-19, when the company is performing Robert Wright and George Forrest’s Kismet.  I intend to be there!


If you can't get enough of ProfMiller, check out his column, ProfMiller@The Theater, at BroadwayShowBiz.com.  Recent reviews include "Triassic Parq The Musical" and "Closer Than Ever."

Posted by Howard Miller at 5:42 PM