And the Envelope, Please: Announcing the 2011 ProfMiller Kudos Awards 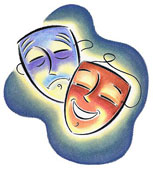 In the spirit of the theater community’s annual awards season, I bid you welcome to our own ProfMiller Kudos Awards for Outstanding Theatrical Achievement, 2010-2011.

Once again, I am please to report that as a committee of one, I was able to reach unanimous decisions in all of the categories.  Needless to say, the selection criteria I have employed reflect my personal biases and judgments, and ties are not unheard of when I deem them to be appropriate.  As I am an equal opportunity theatergoer, these awards encompass both Broadway and Off Broadway productions.

And so, without further ado, the envelope, please:

We begin with a special award, for the Most Underappreciated Show, which goes to The Scottsboro Boys.  While I imagine the Kander and Ebb trunk holds more songs that may yet see the light of day, this was the team’s final fully realized musical following lyricist Fred Ebb’s death in 2004.  But no sentiment need be attached.  This simply was an excellent show, an edgy retelling of the true story of a group of African American teenage boys who were falsely accused of raping two white women in segregated Alabama in the 1930s.  This was one of the few transfers from Off Broadway to Broadway that made a fitting transition to the big stage, with a first-rate cast and strong directing and choreography by Susan Stroman.  It’s nice that it received 12 Tony nominations, but it is likely to be squashed under the juggernaut that is The Book of Mormon.
In the category of Best Revival of a Play on Broadway, we declare a tie between The Merchant of Venice and The Normal Heart—the former, exquisitely directed by Daniel Sullivan, the latter by Joel Grey and George C. Wolfe.  At the performance of Merchant that I attended, the audience, many of whom had quite probably come to see Al Pacino and had little prior knowledge of the play itself, audibly gasped at a couple of key plot turns.  When is the last time Shakespeare was able to garner such a reaction?  As for The Normal Heart, it could easily have come off as mired in yesterday’s headlines.  Instead, it resonates deeply with today’s audiences and reminds us of the potential for theater to fully envelop viewers in both powerful drama and emotional intensity.  When is the last time a speech given by a character in a play (in this instance, by Ellen Barkin) stopped the show by drawing waves of sustained applause?

In a similar vein, we declare a tie for Best Revival of a Play Off Broadway.  The Kudos Award goes to the Atlantic Theater Company’s production of a double bill of one-act plays by Harold Pinter, The Collection and A Kind of Alaska, and to the Signature Theatre Company’s brilliant production of Tony Kushner’s masterwork, Angels in America.  The Pinter plays, under the direction of Karen Kohlhaas, were a revelation of flawless style and splendid acting. Angels in America, stunningly directed by Michael Greif, managed to juggle all of Kushner’s deeply complex ideas without once dropping a ball, and boasted a cast that poured themselves into layered and emotionally honest performances.

For his performance in The Normal Heart, the Kudos Award for Best Actor in a Play goes to Joe Mantello. This has been quite a season for Mantello.  In addition to his tour de force performance in Larry Kramer’s drama about the early days of the AIDS crisis, he directed two terrific productions—Other  Desert Cities at Lincoln Center’s Mitzi Newhouse Theater, and The Other Place at the Lucille Lortel Theatre.

For Best Featured Actress in a Play, the Kudos Award goes to Estelle Parsons, for her turn as a busybody landlady in Good People.  It’s unfortunate she was not nominated for a Tony for this funny, quirky, and compelling performance.

For Best Featured Actor in a Play, the winner of the Kudos Award is Christian Borle, who did outstanding work in both Peter and the Starcatcher and Angels in America.   Watch for him in Steven Spielberg’s new NBC TV show, Smash, which depicts the efforts of a group of people to put on a Broadway musical about Marilyn Monroe.

Moving on to the musicals, we’ll start with the Kudos Award for Best Actress in a Musical. The winner is Laura Benanti, for her wigged out performance in Women on the Verge of a Nervous Breakdown.  She’s likely to win a Tony for the same role, but in the category of Best Actress in a Featured Role.  I’m not bound by the Tony rules, and thought hers was the one truly outstanding performance in this mishmash of a musical.

For Best Actor in a Musical, the winner is Rob McClure, for his  funny and charming performance in Where’s Charley? Mr. McClure played the title role in the Encores! production of Frank Loesser’s lighter-than-air musical, and was outstanding in taking on the mantle that has been indelibly associated with Ray (“Once in Love With Amy”) Bolger.

Both Mr. McClure’s performance and the show itself were a real treat, earning Where’s Charley? the Kudos Award for Best Musical Revival.  A sheer delight, thanks to a stellar cast, sharp directing by John Doyle, and brilliant musicianship of the orchestra, under the baton of Rob Berman.


Finally, in the category of Best New Musical, the Kudos Award goes to The Book of Mormon.  Likewise, the show’s directors Casey Nicholaw and Trey Parker win for Best Director of a New Musical. This odds-on-favorite to win the Tony Award for best musical deserves all of its accolades.

And that’s a wrap. Cue the music and call it a night!

Feel free to tell your friends about this blog, and to share your own theater stories by posting a comment.
Posted by Howard Miller at 4:49 PM