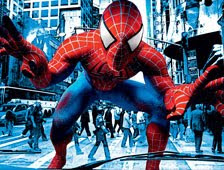 
Feel free to tell your friends about this blog, and to share your own theater stories by posting a comment.
Posted by Howard Miller at 11:17 AM