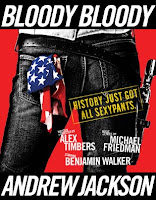 Gotta say, they’ve come up with a brilliant promotional scheme for Bloody Bloody Andrew Jackson, the emo-rock musical that has just transferred from off-Broadway’s Public Theater to Broadway’s Bernard Jacobs Theatre: “History just got all sexypants!”

The posters and the other advertising materials carry that slogan and display the rear end of a dude in tight black jeans, with an American flag handkerchief sticking out of the left pocket and a holstered pistol on the right hip.

That the dude is a rock star version of the seventh president of the United States, the populist Andrew Jackson of the title, makes for an intriguing and imaginative image.

Unfortunately, from my perspective at least, that’s as good as it gets, despite energetic performances by the members of the cast, headed up by Benjamin Walker in the title role. The show, heavily dependent on fratboy humor and vaguely homophobic burlesque-y comedy—think Saturday Night Live on a particularly bad Saturday night—is just not terribly successful in pulling together style and substance to sell itself as the political satire that lies underneath the layers of inanity.

If watching Andrew Jackson pandering to the people and playing to their xenophobic views of the native American Indian population reminds you of the shenanigans of the Tea Party crowd, that may say more about what you bring to the show than what it brings to you.

In all fairness, I will say that many in the 20-to-30-something crowd that filled the theater during the preview performance I attended laughed heartily at every gag and pretty much every time a cast member uttered the “F” word or its well-known variation, the “MF” word. Since that pretty much included every other word, at least some in the theater had a good time.

Feel free to tell your friends about this blog, and to share your own theater stories by posting a comment.
Posted by Howard Miller at 10:12 PM