Forget the Tonys: Welcome to The First Ever ProfMiller Kudos Awards! 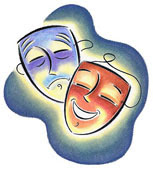 Well, the Tony Awards are this weekend, and while I wish all of the nominees the very best of luck, I am making no predictions whatsoever as to the results.

Instead I would like to offer up my own awards.

Call them the 2009-2010 ProfMiller Kudos Awards for Outstanding Theatrical Achievement!

As I committee of one, I was able to reach unanimous decisions in all of the categories, some of which are unique to this ceremony, and all of which reflect my personal biases and judgments. These awards encompass both Broadway and Off Broadway productions; I am an equal opportunity theatergoer!

And so, without further ado, the envelope, please:

The first award, given for the Most Underappreciated Play of the season, goes to Brighton Beach Memoirs. This funny, warm, well-directed, well-acted, engaging, and loving revival just never took off and closed quickly, amidst much speculation as to what brought it to its knees, and taking with it the opportunity to see the play with which it was to be paired: Broadway Bound. I guess it’s like they say, “Nostalgia ain’t what it used to be!”

In the category of Best Actress in an Underappreciated Play, the Kudos Award goes to Laurie Metcalf. Long associated with the TV sit-com starring the comic actress sometimes known as Roseanne Barr, Ms. Metcalf is a gifted and often outrageously funny stage actress, as anyone who saw her in November or A Lie of the Mind could attest. Brighton Beach Memoirs showed her in another light, and she gave a bravura performance as Kate Jerome, the mater familias who holds the family together through difficult times.

Ms. Metcalf’s male counterpart and the winner of the 'A For Effort' Kudos Award is Norbert Leo Butz who did his damnedest to sell Enron through dint of personality and adrenaline alone. His own “smoke and mirrors” rivaled those offered up by the production itself, and, in an interestingly ironic way, mirrored that of the character he portrayed, former Enron CEO Jeffrey Skilling.

In the category of Physical Comedy, the Kudos Award goes to Jan Maxwell, a wonderful screwball comic actress, who brought down the house with her glorious meltdown in The Royal Family.

For Best Performance in a One-Person Show, the Kudos Award goes to Jim Brochu, who wrote and stars in Zero Hour, giving us a totally believable portrait and a fascinating evening with Zero Mostel. I rarely like one-person shows, but I was held spellbound for the entire time. Heck, while we’re at it, let’s give Mr. Brochu a Kudos Award for Playwright of the Best One-Person Show, and throw in an Award to Piper Laurie for Best Director of a One-Person Show

The winner of the Kudos Award for Best of the Rising Playwrights is Annie Baker, who gave us two outstanding works this season: Circle Mirror Transformation and Aliens. Hers is a voice to be reckoned with. She should also share her Award with director Sam Gold, who shepherded both shows.

For his star turn as Luckiest Playwright of The Season, the Kudos Award goes to Donald Margulies. His two plays , Time Stands Still and a revival of Collected Stories, were blessed by the presence of wonderful actresses giving exquisite performances: Laura Linney in the former, and Linda Lavin in the latter.

Indeed, in recognition of her performance in Collected Stories, Linda Lavin is the recipient of the Kudos Award for Best Actress in a Play. Her portrayal of Ruth Steiner is utter perfection, revealing layers of complexity in the central character of a talented, conflicted, and neurotic writer and teacher who is crushed by her student’s success and perceived betrayal.

For Best Revival of a Play, the Kudos Award goes to everyone associated with A View From The Bridge. Director Gregory Mosher has brought out the very best in the cast, headed up by Liev Schreiber, Scarlett Johansson, and Jessica Hecht. An absolutely flawless and mesmerizing production.

For his performance in A View From The Bridge, the Kudos Award for Best Actor in a Play goes to Liev Shreiber, whose every acting moment was layered with depth and ambiguity, through which he created a most complex portrayal of the character of Eddie Carbone.

The Best Play of the Year Award will emulate the Obies, and will honor Annie Baker’s two entries: Circle Mirror Transformation and Aliens.

In recognition of its work as the Best Off-Broadway Theatrical Company, the Kudos Award goes to The Irish Rep. I never cease to be amazed at the fine work that is produced there--always creative, imaginative, and magical in the way it uses its postage stamp stage to its fullest advantage. I particularly enjoyed The Emperor Jones and White Woman Street during the 2009-2010 season and look forward to seeing pretty much whatever else they come up with.

For Best Ensemble Performance, the winner of the Kudos Award is the cast of The Temperamentals. The company, headed up by Thomas Jay Ryan and Michael Urie, performed splendidly together in this thoroughly enjoyable, intelligent, and funny play about the early days of the gay rights movement in the United States.


Moving on to the musicals, we’ll start with the Kudos Award for Best Actress in a Musical. The winner is Kate Baldwin, who lit up the stage in the revival of Finian’s Rainbow. What a beautiful singing voice, just right for those glorious Burton Lane/Yip Harburg songs.

For Best Actor in a Musical, it’s a tie! Christopher Sieber wins for his performance in The Kid, if only for the look of near panic that crosses his face with regularity so that you can feel his character’s neuroses rise to the surface. Mr. Sieber shares the Kudos with Bobby Steggert—not for his Tony nominated role in Ragtime, but for his leading role in the musical Yank, in which he holds the audience in the palm of his hand as the narrator and as a young gay soldier during World War II.

For Best Musical Revival, the Kudos Award goes to Anyone Can Whistle, which had a brief run as part of the Encores series at City Center. This semi-staged production, starring Donna Murphy, Sutton Foster, and Raúl Esparza, erased any notion that the legendary flop of a show by Arthur Laurents and Stephen Sondheim needs to remain hidden. It was terrific!

For Best Musical Off Broadway, the winner of the Kudos Award is The Toxic Avenger, a total hoot of a show from start to finish—funny, clever, crazy, energetic. Haven’t enjoyed a musical this much since Urinetown.

In the Category of Best Musical on Broadway, multiple Kudos Awards go to everyone involved in Fela. Hats off to director and choreographer Bill T. Jones, actors/performers Sahr Ngaujah and Lillias White (she of the shattering soulful voice), set designer Marina Draghici, and the members of the glorious onstage band Antibalas.

And that’s a wrap. Cue the music and call it a night!

Feel free to tell your friends about this blog, and to share your own theater stories by posting a comment.
Posted by Howard Miller at 2:01 AM